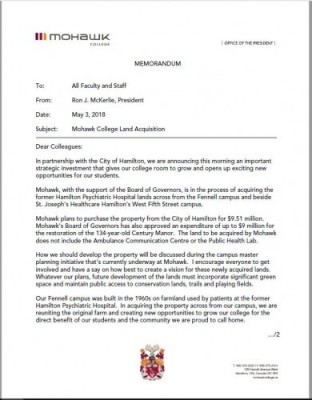 In partnership with the City of Hamilton, Mohawk has announced it is in the process of acquiring the former Hamilton Pyschiatric Hospital lands across from the Fennell campus and beside St. Joseph's Healthcare Hamilton's West 5th Street campus.

Today's announcement was part of a larger announcement by Ontario's Ministry of Housing to create more affordable rental housing in Hamilton. For more details on the announcement visit the Ministry's website.