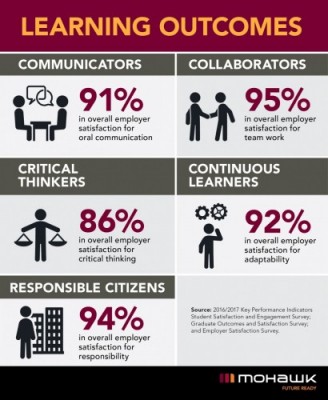 For the seventh consecutive year, Mohawk finished first among all colleges in the Greater Toronto and Hamilton Area (GTHA) for student satisfaction. Ninety-one per cent of students also reported they would recommend Mohawk to family and friends.

With a graduate employment rate of 86 per cent, Mohawk finished first among GTHA colleges for the fifth consecutive year. Ninety-six per cent of graduates said they would recommend Mohawk to family and friends.

The KPI survey was conducted between March 2016 and February 2017 by two independent research firms. The Province and Ontario’s 24 public colleges have gathered annual data on college results since 1998.

“Students and learning are at the heart of all we do at Mohawk. We are honoured to once again earn high marks and a vote of confidence from our students, graduates and employers. We never take these scores for granted or rest on our laurels which is why we are carrying out the largest renewal of labs and classrooms in Mohawk’s 50-year history.”