Chosen as one of 6 Innovation projects from Ontario Colleges, the Mohawk 3D Printed Braille Map is an example of using technology for social improvement.

Inspired by Mohawk alumni Stephannie Leach’s dream of being able to find her way easily around campus, this student-led social innovation has been developed in collaboration with Mohawk College’s Accessibility for Ontarians with Disabilities Act (AODA) team, the Canadian National Institute for the Blind (CNIB) and W. Ross MacDonald School for the Blind . Using additive manufacturing to address the needs of our community, Mohawk’s Additive Manufacturing Resource Centre (AMRC) developed a 3D tactile map to support students, staff, and visitors with vision loss to safely and independently navigate the Fennell campus.

The full map is planned to be installed at Fennell Campus this fall. This map is a benchmark of accessibility for other public institutions.

Note: The version of the map will be showcased on the Ontario Colleges Amazing50 tour and has been created for demonstrative purposes only.  The full map is viewable at Mohawk College, Fennell Campus in Hamilton, Ontario.

The Amazing50 tour will be in Hamilton in Mohawk's space at Supercrawl on September 9th!.

For more information on the Amazing50 tour follow the schedule of the trailer as it visits all 24 of Ontario colleges starting September 8th.  View the full intinerary at http://amazing50.ca/events/ 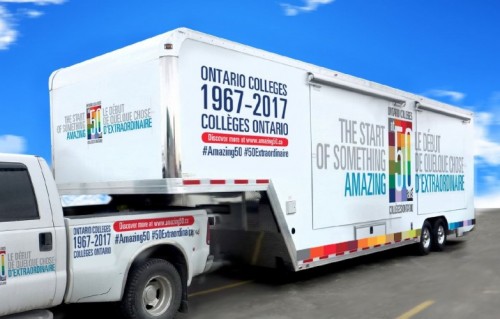 It’s the stuff of anxiety for any new college student.

Finding your way around campus those first few days of class seems to take equal parts luck and a solid sense of direction. Imagine finding your way without your eyesight to guide you. Navigating the halls of any post-secondary institution also requires faith when you have a visual impairment.

But a new map developed at Mohawk College’s Additive Manufacturing Resource Centre (AMRC) is helping students who are visually impaired to find their way around campus more easily.

The 3D map includes names of buildings in Braille and in a large font that non-Braille readers can discern through feel, as well as contrasting colours to help those with partial vision differentiate between different areas on campus.

It’s practical and effective, and exactly the kind of project that AMRC interim manager Jeffrey McIsaac loves to tackle.

The map came to be thanks to a bout of lunchtime boredom. Stephannie Leach, who works in Accessible Learning Services at Mohawk, was faced with an otherwise routine noon hour last summer when she decided to join a tour of the AMRC’s 3D printing equipment.

Leach, who is visually impaired, had several questions by the end of the session, including the request to see a 3D printer by feeling it. “We got to talking and I thought, ‘Hey, have you ever thought of making a tactile map for the college?’ ” she recalled.

Leach knew firsthand the challenges that visually impaired students have in getting around campus. They typically have to enlist the help of the Canadian National Institute for the Blind (CNIB), which offers students up to two sessions to get familiar with campus before school starts. Otherwise, Leach steps in to help them find their way.

“To have a map in an accessible format, they’ll be able to use that independently instead of having to rely on an outside source all the time,” Leach said.

The idea was an easy sell. Mohawk, like other public institutions, is required to provide accessible way-finding materials under the Accessibility for Ontarians with Disabilities Act (AODA).

Work on the map started with the 2016-17 school year. Luke Gladding, a second-year mechanical engineering student, took the lead on its design.

It involved more than drafting a map and bringing it to life in the 3D printer, however. Gladding spent hours learning the intricacies of Braille, including the precise size and spacing of each dot that makes up Braille letters and words.

With the large font, Gladding had to get the size, spacing and thickness just right. “It was a lot of sitting with my eyes closed, feeling how things would go,” he recalled.

That’s when he turned to students for help. They pointed out typos in the Braille on the prototypes, and suggested larger letters written in regular font.

“Student input was key,” Gladding said. “It was really about figuring out what would work. Those machines can print anything you can draw, so if you can create anything, what’s the right thing? I have my vision so it’s difficult to imagine a world without vision, so what works best?”

The 3D map, which will be installed later this spring, is also being held up as a benchmark of accessibility for other public institutions.

McIsaac shows it to every lab visitor, such as government officials and international guests, who could use it where they work. He also wants pitch the idea and importance of tactile maps to organizations like the CNIB.

Leach imagines it becoming a regular fixture on other campuses throughout the province.

“I’m really happy with it,” she said. “We think other people that come in from the community will be able to use it, too.”