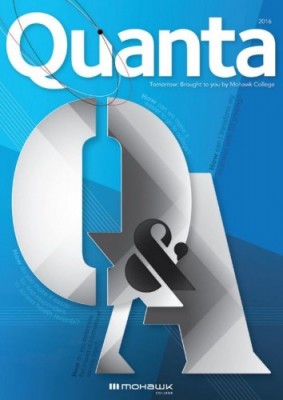 Quanta is an annual celebration of research and innovation at Mohawk College. In this year's issue, meet some amazing Mohawk faculty, staff and students who are creating the future, today. Learn how researcher Dr. Nafia Al-Mutawaly and a team of students and faculty at Mohawk's Energy Research Centre are looking for ways to improve power quality. Find out how Mohawk's mHealth and eHealth Development and Innovation Centre is helping MEDICAlert give first-responders faster access to patient records through mobile technology, and discover how City Scool by Mohawk is helping to end the cycle of poverty in Hamilton by removing barriers to post secondary education.