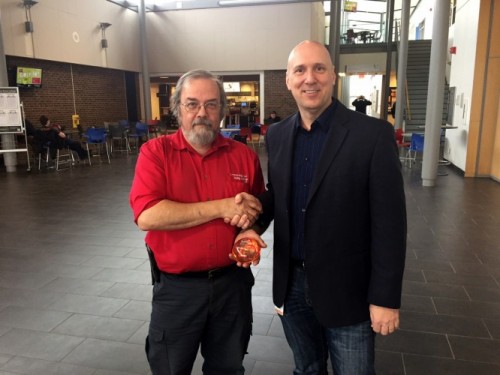 For making sure everything’s set up and ready to go for students and apprentices at Mohawk’s Stoney Creek campus, Gary Strong is an Everyday Hero. Gary is a Facility Services Technician who started working part-time in Mohawk’s McIntyre Theatre in 1978 before joining the Audiovisual and Media Studies departments. Gary then became a member of the Facilities team at the Fennell campus in 1994 and moved to Stoney Creek a year later. Gary can often be seen late into the evening setting up rooms for meetings and events. Gary also manages the Horticultural Technician apprenticeship program, where he maintains the inventory of tools and equipment and delivers them to off-site locations for students. Gary does his work with both a smile and a great attention to detail. Director of Facility Operations Henry Colyn (right) presented Gary with his Everyday Hero Award during Mohawk’s 2018 townhall meeting. Know someone who’s making a difference at Mohawk for students, faculty and staff? Nominate them for an Everyday Hero award at mohawkcollege.ca/everydayhero.