Roberta Tremain shares her story on how she became the first female to attend the Hamilton Institute of Technology. 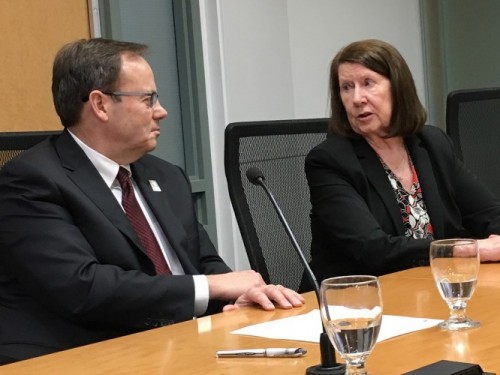 Roberta Tremain was the first female to attend the Hamilton Institute of Technology (HIT) in 1958.

Roberta was accepted into the chemical technology program, however just two weeks before the semester was about to start, HIT tried to rescind her offer. Roberta believes the school thought she was a Robert. 17-year-old Roberta stood her ground, and the school allowed her to attend on probation until December.

She showed them, and everyone she encountered along the way that a woman can do anything a man can. She switched into the textile dyeing and finishing after Christmas, as she thought it sounded more interesting. In May Roberta asked the school if she was off probation, she said, "they just laughed and said 'yeah.'"

Roberta continued to pursue a master’s degree in Textile chemistry, and graduated with six job offers. "I didn't consider myself to be a trailblazer ... I just wanted to go to school," says Roberta.

On her 50th anniversary of her graduating year, Roberta returned to Mohawk to donate $50,000 to create admittance scholarships to interest more young women in STEM.

Roberta encourages young people to “be true to yourself and do something you really like.”