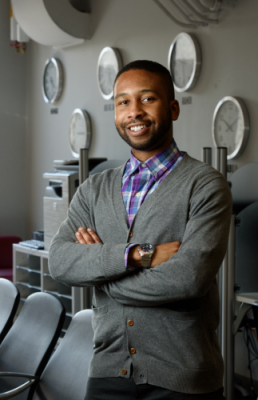 Heston Tobias was tasked by Hamilton Health Sciences (HHS) to find a smoother path for Mohawk‘s non-health care students to hospital placements and it earned him a full-time job.

Tobias was on a placement during his graduate program in Business Analysis at Mohawk and worked under Dianne Norman, Manager of Student Affairs and Academic Relations at HHS.

Norman believed students with diverse skill-sets could be useful in clinical settings but that a process was needed to assess needs and gaps and how they could be addressed. Tobias, after countless interviews with people from across HHS, built the framework for an algorithm.

“Dianne, and John Parker gave me so much confidence to spearhead this project. I was exposed to the culture of HHS. Everyone was so willing to talk to me. I realized I wanted to land a job here.“

Parker says Tobias, who holds an English degree and a masters in cultural studies and critical theory, both from McMaster, did a “remarkable job“ on the project.

A week after his graduation from Mohawk he was hired by the HHS HITS eHealth Team as a Transformation Change Analyst. He‘s part of a group that creates and implements e-health solutions across the Local Health Integration Network.

“That just shows the value of these experiential learning experiences,“ said Parker.