David Braley, a lead supporter of Mohawk College’s Fennell Campus renewal initiative and the namesake of the college athletic and recreation centre, passed away peacefully October 26, 2020 in Burlington at the age of 79.

A Distinguished Fellow of Mohawk College, Braley will be remembered as a successful businessman, a member of the Canadian senate, a winning CFL owner, a gracious philanthropist and a civic champion of Hamilton.

“David Braley was a major supporter of the dramatic transformation of the Fennell Campus,” said Mohawk College President and CEO Ron McKerlie. “He recognized the many benefits that a state-of-the-art athletic facility can provide students, and the entire community. And he made it a reality.

“He showed a similar commitment to institutions throughout Hamilton, leaving a permanent impression on this city. We send our sympathies to his family and loved ones. He will be missed.” 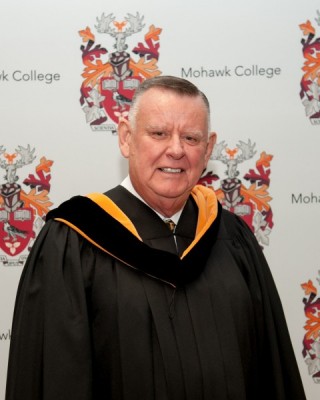 Braley’s $3 million leadership donation to Mohawk College supported construction of the 64,000-square-foot athletic centre where Mohawk students now compete, train and exercise. The project replaced one of the oldest and smallest gyms among Ontario’s 24 colleges with an award-winning, environmentally designed facility that regularly hosts provincial and national tournaments, serving the college and the community.

“The David Braley Athletic & Recreation Centre is an important part of the overall positive college experience for Mohawk students,” said Garrett Blair, President of the Mohawk Students’ Association. “The bright, modern space offers students some of the best equipment and environment available anywhere, for athletes and non-athletes alike. The DBARC is truly a landmark and a popular destination for students. Mohawk College students are thankful to be benefiting from David Braley’s support, for this generation of students, and those to come.”

Raised and educated in Hamilton, Braley entered business with General Motors and then London Life Insurance, before purchasing William Orlick Limited. He turned Orlick Industries into a successful auto-industry company. As an avid sports fan over the course of his life, he was an owner of the CFL’s Hamilton Tiger-Cats, the Toronto Argonauts and the BC Lions. He was briefly the Commissioner of the CFL and Chair of its Board of Governors - he was inducted into the Canadian Football Hall of Fame in 2012. In politics, Braley was named to the Canadian Senate. And, as a philanthropist, he supported Mohawk College and several other Hamilton institutions, including McMaster University, Royal Botanical Gardens and all the city’s hospitals.

The Hamilton community had much to thank David Braley for during his life, and his memory will strongly live on at Mohawk College and throughout Hamilton.