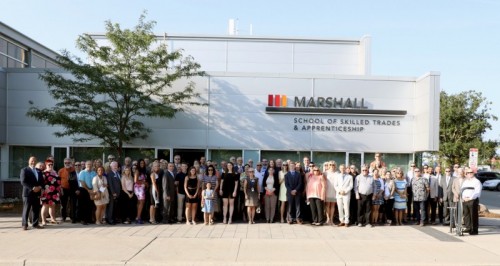 Mohawk recognized the family with the naming of the Marshall School of Skilled Trades & Apprenticeship at the Stoney Creek campus.

In 2006, the family honored their late father Gerald Marshall by supporting major construction and renovations at the Stoney Creek Campus and in recognition for their outstanding support the building was named the Gerald Marshall Centre for Transportation.

The family continues to host an annual fundraiser that celebrated its 10th anniversary last year. This year’s event is being held on October 13th at the Grand Olympia in Stoney Creek.

“The Marshall family are great champions of the skilled trades and outstanding supporters of apprentices, students and our college. We’re proud to recognize their generous support by naming our School of Apprenticeship & Skilled Trades in their honour.” – Mohawk College President Ron McKerlie

“Skilled tradespeople have been essential to the success of our family businesses and to the strength of our community. We hope our family’s support for Mohawk College inspires others to give and to pursue rewarding careers in the skilled trades.” – Jo-Anne Spadafora

For more information or questions about how you can support capital projects like this one, please contact:

Mohawk College educates and serves 30,000 full-time, part-time and apprenticeship students at three campuses in Hamilton, Ontario. Mohawk ranks first in student and graduate satisfaction among all colleges in the Greater Toronto and Hamilton Area and 15th among all colleges in Canada for applied research activity. Recognized as one of Canada’s greenest employers, Mohawk is currently constructing Canada’s largest, and Hamilton’s first, net zero institutional building.