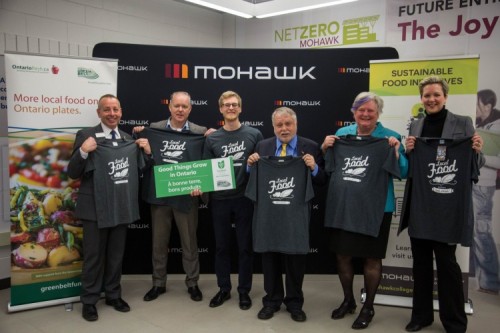 Hamilton - Today, Ted McMeekin, MPP for Ancaster—Dundas—Flamborough—Westdale on behalf of Jeff Leal, Minister of Agriculture, Food and Rural Affairs announced that the Government of Ontario is supporting fifteen local food projects across the province that will increase access to local food and support the growth of Ontario’s agri-food sector. These investments strengthen our agri-food value chain which means more local food on Ontarians’ plates.

The announcement was made at Mohawk College, one of the recipients of the over $300,000 in new investments made possible with funding by the Government of Ontario through the province’s Local Food Investment Fund, administered by the Greenbelt Fund.

“Through the Local Food Investment Fund, our government is investing in Ontario’s agri-food sector, to make it even easier for Ontarians to enjoy the good things grown, harvested and made in Ontario. By increasing access to local food and drink, and supporting innovation in processing, we are strengthening rural and urban economies, creating good jobs, and building a more sustainable future.”

Jeff Leal, Minister of Agriculture, Food and Rural Affairs and Minister Responsible for Small Businesses
Follow me on Twitter (opens in new window)

"The fifteen new projects supported by the Greenbelt Fund touch on all aspects of local food – from investing in farmers and growers to innovators and public sector leaders like Mohawk College. The Fund is making local food the best choice for Ontarians. We are very proud of our partnership with the Government of Ontario which has resulted in a 13 to 1 return on our investments in the local food economy through the Local Food Investment Fund.”

“Through the Local Food Investment Fund, our government is making it easier for Ontarians to enjoy the good things grown, harvested and made in Ontario. When we invest in projects that support Ontario’s booming agri-food sector, we are helping strengthen our communities, both rural and urban, create good jobs and boost our local economies."

“Mohawk College is a proud leader in local food and sustainability. Our new local food procurement certification course offered as a professional development program through our Continuing Education faculty will strengthen that leadership and train foodservice professionals across all sectors to increase their local food offerings."

Mohawk College ranks among the top colleges in Canada for applied research activity. Mohawk educates and serves 30,000 full-time, part-time and apprenticeship students at three campuses in Hamilton and ranks as the number one college in the Greater Toronto and Hamilton Area for student and graduate satisfaction.

About the Local Food Investment Fund:

In 2015, the Ontario government provided the Greenbelt Fund with $6 million over three years to support initiatives that will help support the province’s local food strategy by enhancing consumer awareness and access to local food, as well as generating demand and supply of Ontario foods and beverages. In 2017, the Ontario government announced an additional $1 million in funding to extend the program. The investment supports initiatives such as the Local Food Investment Fund, which is a grant program for farmers and other businesses along the food value chain, broader public sector institutions, and not-for-profits working to increase the amount of Ontario-grown and made food purchased and enjoyed across the province. The Local Food Investment Fund's three grant streams focus on enhancing local food literacy, increasing market access for small and mid-size Ontario farmers and processors and increasing purchases of local food in the broader public sector, such as hospitals and universities.

About the Greenbelt Fund:

The Greenbelt Fund changes the way we eat food in Ontario. The Fund’s innovative investments get more local food onto the plates of Ontarians. We work with businesses, institutions and NGOs to make Ontario’s farmers the first choice for consumers. The Fund’s work has generated a 13-fold return on our investments, permanently changed the food value chain and improved local food awareness and education around the province. As a not-for-profit, the Greenbelt Fund is supported by public and private sources.