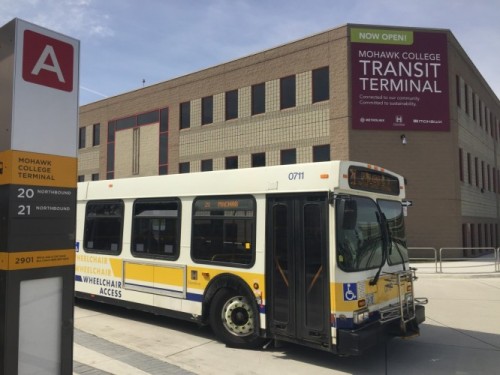 Completed on time and on budget, the new transit terminal at the Fennell campus will improve commutes for Mohawk College students, faculty, staff and Mountain residents. The terminal also supports Mohawk’s efforts to create a more pedestrian-friendly campus.

The Ontario government has invested $3.3 million, through Metrolinx, to help Mohawk College build the new transit terminal. Ontario is making the largest infrastructure investment in the province’s history — more than $134 billion over 10 years, which is making 110,000 jobs possible every year across the province, with projects such as roads, bridges, transit systems, schools and hospitals. In 2015, the province announced support for more than 325 projects that will keep people and goods moving, connect communities and improve quality of life.

“This is great news for Hamilton residents who use transit to move around the city. Our government’s commitment to expanding and improving transit helps manage congestion, connect people to jobs and improve our economy.”

“The opening of the Mohawk College transit terminal advances another element of the city's transit plan and increases capacity for ridership at an important hub for Hamilton," said Mayor Eisenberger. "The collaborative effort between Mohawk College and Metrolinx serves as an ideal example of mutually beneficial city-building and community development.”

“The new Mohawk College Terminal will connect more people to transit and Metrolinx is extremely proud to be part of this project. Our continued, region-wide focus on making connections and improving the transit network is exemplified with the opening of this new terminal.”

“The thousands of students, faculty and staff who rely on transit to get to our Fennell campus now have a shorter and better commute thanks to our partners at the City of Hamilton and Metrolinx. Relocating buses to the Mohawk College Terminal also supports our efforts to create a more pedestrian-friendly campus.”

More than 4,100 students, faculty and staff ride the HSR daily to and from Mohawk’s Fennell campus.

Construction on the Mohawk College Terminal began in September 2015.

More than $90 million has been invested in new construction and major renovations at the Fennell campus for the direct benefit of students.