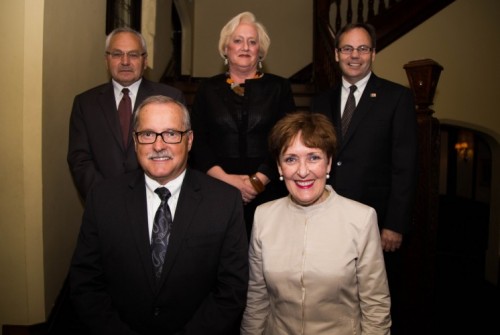 Mohawk’s Distinguished Fellows make invaluable contributions to the college through academic advisement and student engagement, community outreach and strategic advisement to Mohawk’s senior leadership team. The distinction is conferred during Convocation by virtue of hooding. Participation in Mohawk College’s Distinguished Fellow program is by invitation only, with the title conferred and service to the college recognized during Convocation ceremonies.

Peter Vicano was inducted during the Convocation ceremony for the School of Skilled Trades and Apprenticeships on Tuesday, June 14. From modest beginnings that included himself, a pick up and borrowed tools to a major construction company with an impressive list of industrial, commercial and institutional projects, Peter built a company to be proud of. Founded in 1973, Brantford-based Vicano Construction has completed thousands of construction projects throughout Ontario, with individual projects in excess of $50 million. Under Peter’s leadership Vicano Construction has earned a reputation for ability, integrity, fiscal responsibility and sound management in serving clients. Peter graduated from Mohawk College’s Architectural Technology program in 1972.

Winnie Doyle was inducted during the Convocation ceremony for the School of Health Sciences on Wednesday, June 15. A healthcare professional with more than 35 years of experience, Winnie serves as Vice President, Clinical Services and Chief Nursing Executive at St. Joseph’s Healthcare Hamilton. Winnie has worked in clinical practice, research and more recently as a senior administrator in acute clinical programs. Winne is an advocate and leader when it comes to ensuring that clinical placements are made available to Mohawk students. She has worked tirelessly to create opportunities in all disciplines for a wide range of students at all levels. Without her support, Mohawk would not be able to achieve the high level clinical experiences required to sustain the college as a leader in Health education. Winnie received her Master of Nursing Administration from the University of Toronto in 2000.

Ann McLaughlin was inducted during the Convocation ceremony for the School of Human Services on Thursday, June 16. An entrepreneur, educator and community builder, Ann is a retired business owner with strong connections to the Hamilton community. Among her many accomplishments, Ann helped build a local business that caught the eye of Toshiba industries and resulted in that company establishing itself in Hamilton. Deeply committed to social justice and the creation of a diverse, tolerant and culturally rich community in Hamilton, Ann has served on numerous boards and advisory committees including Co-Chair for Workforce Planning Hamilton, Mohawk College’s Access Hamilton Employer Engagement Steering Committee, the Hamilton Chamber of Commerce’s HR Committee and as Chairperson of the Turning Point Giving Circle with YWCA Hamilton. Ann has an MBA from McMaster University and an Honours B.A. in Physchology from the University of Guelph.

Richard J. Brennan was inducted during the Convocation ceremony for the School of Media and Entertainment on Thursday, June 16. A newspaper reporter for 43 years, Richard covered a variety of stories from his days at the Ingersoll Times weekly newspaper to the Toronto Star where he worked as a National Affairs reporter and most notably as a political reporter with the paper’s Queen’s Park and Ottawa bureaus. It was at Queen’s Park where he earned the nickname the Badger for never letting go of a story. It was a reputation that preceded him to Ottawa where shortly upon his arrival in 2007 he was elected president of the 400-member Parliamentary Press Gallery – the only person to hold that title both provincially and federally. Richard graduated from Mohawk’s Journalism program in 1972.