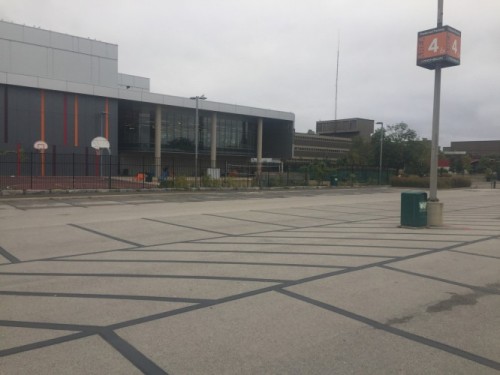 The carport’s six solar tables will cover 125 parking spots at Mohawk’s Fennell campus. The 4,600 square metre (50,000 square foot) carport will connect to the college’s high voltage network and help power the net zero Joyce Centre for Partnership & Innovation along with lights and electric vehicle charging stations in the campus parking lots. The solar tables will also shelter cars from rain, snow and ultraviolet rays. The carport will reduce carbon emissions by an amount equal to what can absorbed by a 4 hectare (10-acre) forest.

Mohawk is working with QPA Solar, a Dundas-based solar energy project development and engineering firm. Construction is expected to be completed by early January. The solar tables will be supported by steel columns that are embedded in concrete pier foundations below grade and 3 metres (10 feet) above grade. There will be no reduction in the number of parking spots in the lot.

The solar carport joins a growing list of sustainability initiatives at Mohawk, including the construction of Canada’s largest zero carbon institutional building, the installation of more than 1,900 rooftop solar panels and the opening of the Centre for Climate Change Management in partnership with the cities of Hamilton and Burlington and Sustainable Hamilton Burlington.

Watch the construction of the Solar Carport live: http://web.mohawkcollege.ca/live-feed/ontario-solar-carport/ontarios-largest-solar-carport.html

“Environmental sustainability is a strategic priority for our college. Our new solar carport will further reduce our carbon footprint, lower our energy costs and be a teaching tool for students who are pursuing careers in the renewable energy sector.”

Mohawk College educates and serves more than 30,000 full-time, part-time and apprenticeship students at three campuses in Hamilton, Ontario. Mohawk was the first college in Ontario to adopt a formal environmental management agreement and has been named one of Canada’s greenest employers for the past five years in a row.