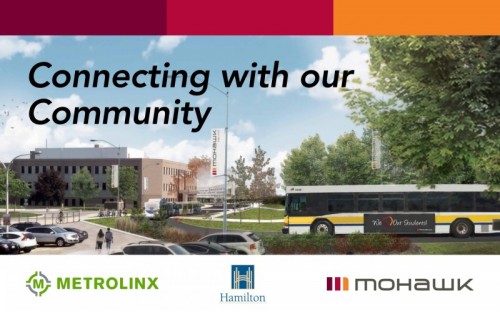 Mohawk College has been named Smart Commute's 2015 Employer of the Year in Hamilton.

Smart Commute is a program of Metrolinx and the municipalities in the Greater Toronto and Hamilton Area.

Since joining the Smart Commute program in 2008, Mohawk has enhanced its Smart Commute presence by building on previous successes and investing in new infrastructure so students, faculty and staff can use alternative modes of transportation.

During this time, the number of students, faculty and staff has increased by more than 40 per cent at Mohawk's Fennell campus. A recent audit showed that between 60 and 70 per cent of campus commuters are now travelling using a method other than driving alone. This shift allowed for an overall reduction in parking capacity, leading to an estimated savings of more than $5 million since new parking facilities did not need to be constructed.

Mohawk has reduced the use of single-occupant vehicles through a variety of ways. An expanded carpool program includes 50 dedicated carpool parking spaces and two Campus Student Car Share vehicles. Mohawk has introduced four electric vehicle charging stations and four self-service bike repair stations. A new Mohawk College Transit Terminal is also under construction, which will include bus bays and terminals serving multiple transit routes. This new facility will make transit a more viable option for the 4,000 students, faculty and staff who travel there daily.

These initiatives are funded through the Sustainability Office’s annual budget and supported by events and incentives, strong collaboration with key community partners and on-campus outreach activities. The success of these initiatives is inspired by the needs of faculty, staff and students.