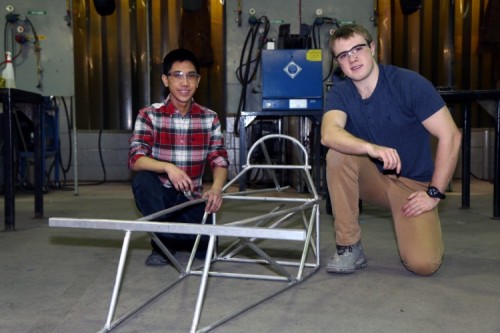 Eleven Mohawk students are gearing up to compete in the annual Shell Eco-marathon in downtown Detroit this April. The students are are putting their Mohawk education to work in designing and building an electric car for the competition.

The multi-disciplinary team of 10 students from the Fennell and Stoney Creek campuses will be going up against 224 teams from across North and South America. Each team must design, build, test and drive ultra-energy-efficient vehicles.  The ultimate winner will be the team with the most energy-efficient car. This is the first time Mohawk has taken part and we’re the only college in Canada competing in the Motor City.

Joules Estigoy is part of the Mohawk team and one of two drivers who will pilot the machine through the streets of the Detroit. The team's the three-wheeled machine will be powered by an electric motor that will propel the vehicle and driver through a closed circuit in downtown Detroit at speeds up to 30 kilometres per hour.

Joules says he and his teammates have been busy assembling the chasis for the car at Mohawk's Stoney Creek campus and aim to have the motor and steering mechanisms installed by the end of February when they plan to put the vehicle on display at the Fennell Campus.