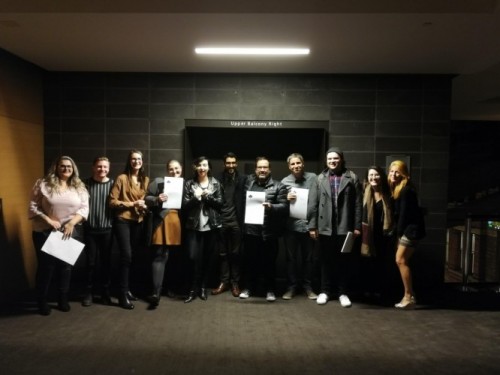 Once again, Mohawk College Advertising students have distinguished themselves on the national stage winning three silvers at the ADCC's (Advertising and Design Club of Canada) student awards last Thursday. Mohawk also received one Merit award. It was the most medals of any school in the country.

Brennan and Cullen also took sivler for their The Jurassic Park Coaster concept. The idea was to create a bluetooth-powered coaster that syncs up with a blu-ray player. When movie buffs watch the new Jurassic Park movie at home - just like in the original Jurassic Park - their water would ripple when the dinosaurs roar.

The final silver went to Maddie George and Kira McNeil for their Calgary Stampede concept. These western-designed posters remind everyone that life isn't easy if you're a cowboy. Lines like "A cowboy tan is what's left when you wash the dirt off." Or, "Around here mud masks aren't relaxing" are accompanied by photographs highlighting the dangers of competing in the stampede.

All of the students are coached and mentored by professors Rafael Ferreira and Jef Petrossi.