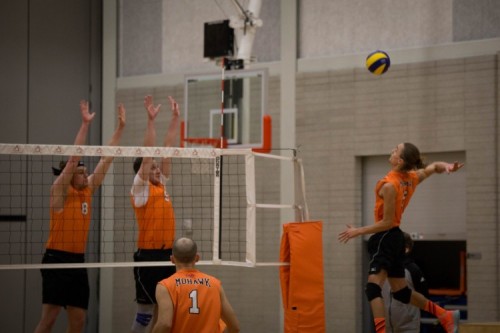 Hamilton, ON (February 3, 2017): More than 150 athletes from across Ontario will gather at Mohawk’s Fennell Campus from February 23-25, 2017 for the 2016-17 Ontario College Athletic Association (OCAA) Men’s Volleyball Championship.

Head Coach Matthew Schnarr says the Mountaineers are ready to meet the competition on home court. Mohawk is ranked second in the West division standings just behind rival Fanshawe College.

“It’s been a good year for the team,” says Schnarr. “The team has played well this season and we’re feeling confident heading into the tournament.”

This will be Schnarr’s last OCAA as head of the Men’s Volleyball squad. The former Mountaineer and 10-year coaching veteran will shift his focus to Mohawk Mountaineers Women’s Volleyball team for the 2017-18 season. Schnarr has been the head coach for both the men’s and women’s teams this season.

The OCAA Volleyball Tournament is open to the public. Tickets can be purchased at the Athletics Office in R105 (David Braley Athletic and Recreation Centre). Adult passes can be purchased for $20. Full and part-time Mohawk students are free with their ONE Card. Single day passes are available for $10 adults and students over 12. Children under 12 are free.