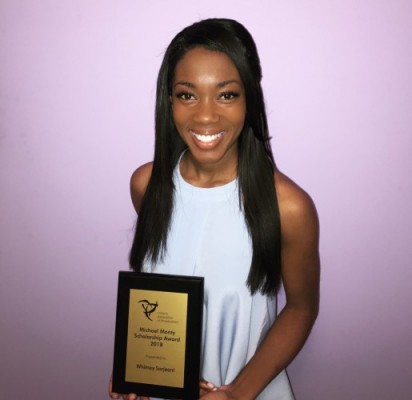 It’s been a great month for Mohawk student Whitney Sarjeant.

The 20-year-old Broadcast Television Communications student was awarded a provincial scholarship and will be heading to Vancouver for the 2018 Juno Awards.

Whitney received the Michael Monty Scholarship from the Ontario Association of Broadcasters (OAB). The scholarship is given annually to one student in Ontario who displays strong academic achievement while pursuing volunteer efforts that make a difference in their community.

Later this month, Whitney will be making her way to Vancouver for her first industry job. She is working on the 2018 Juno Awards through her internship with Insight Productions, one of Canada’s leading production companies for television programming.

Television and Communications Media program coordinator Patrick Hanson, who nominated Whitney, says “she has a unique ability to instantly change the dynamic of a room and the people in it for the better. Whitney is brimming with positivity, I have no doubt that she is on a path to a very bright future.”