To honor Kelly Dunham’s memory, the Dunham family has generously created student awards at Mohawk College and McMaster university. These endowed awards will provide financial support to female students in varsity basketball, a sport near and dear to Kelly’s heart. The Dunham family, in partnership with Mohawk College, invites you to continue Kelly’s impact through a donation to her award.

“Kelly was an incredible wife and mother to our two teenage children, Mitchell and Ally,” said Doug. “She was also a treasured colleague, friend and coach who is missed by many. Everyone who knew Kelly was completely blindsided by this terrible, sudden and completely unexpected loss. My family takes comfort in knowing that these funds will help keep Kelly’s memory alive. Through these funds, Kelly can continue having an impact on varsity athletes for years to come.”

In support of the Dunham family's commemorative award, and as an incentive to potential donors, Mohawk College has committed to doubling the total value of the scholarship fund once it reaches $25,000 – creating a $50,000 legacy fund for this award.

Those wishing to support this memorial award can make a donation to the Kelly Dunham Memorial Scholarship fund. 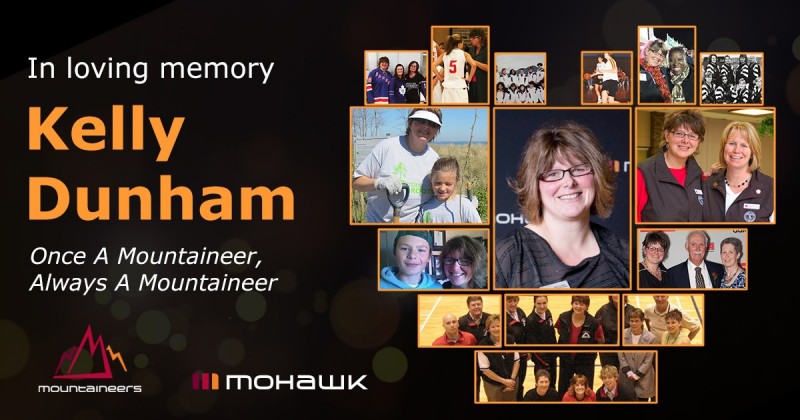 The Mohawk College community mourns the passing of Kelly Dunham, a lifelong Mountaineer who inspired countless people in the college community and far beyond. She passed away May 24 at the age of 51, succumbing to cancer.

Throughout her time as a student, athlete, coach and colleague, Kelly shared her quick smile, generous heart and incredible energy with Mohawk staff, students and alumni.

“She spent her life and career instilling that fierce spirit to succeed and achieve, with class and compassion, in everyone whose lives she touched on and off the court,” remembers longtime friend and former Mohawk Manager of Varsity Athletics and Facilities, Laurie Cahill. “Her unbridled passion and enthusiasm were infectious. She would light up a room and your mood in an instant.”

Dunham, nee Buchanan, first joined Mohawk as a student and athlete. She was a two-time captain of the Mountaineers women’s basketball team. Kelly’s outstanding skills and leadership on the court earned her three OCAA League All-Star awards and she was a key contributor to her team’s amazing undefeated 1990/91 season, eventually winning the OCAA championship. She was a three-time OCAA League All-Star and a CCAA Tournament All-Star and had a collection of Mountaineer athletics awards to her name, as well.

She graduated with a Recreation Leadership diploma and a certificate in Office Administration.

Kelly’s love for basketball, combined with her understanding of people and the game enabled her to make a smooth transition from player to coach.

In 2005, Kelly joined the Mohawk Office of Alumni Relations while coaching the women’s basketball team, harnessing her Mountaineer spirit to bring the alumni community closer together.

For nearly two decades, she shared her joyful perspective and competitive determination with everyone who had the pleasure of spending time with her; student athletes, colleagues, alumni and just about anyone who would accept a smile. She coached until 2015 and served Mohawk alumni until June 2019.

Kelly took an opportunity in 2019 to return to McMaster as an Assistant Women’s Basketball coach and working in the Marauders’ Athletics department.

Her bright talents as a coach and an administrator shone far beyond the boundaries of Mohawk College. She dedicated herself to coaching at an athletic summer camp, was involved with the Canada Summer Games and community basketball programs. She was married to Doug and the proud mother of two children, Mitchell and Ally.

We keep her family and all who mourn her passing in our thoughts.

As Laurie Cahill remembers, Kelly always signed off with Mohawk in her heart: “Once A Mountaineer, Always A Mountaineer”