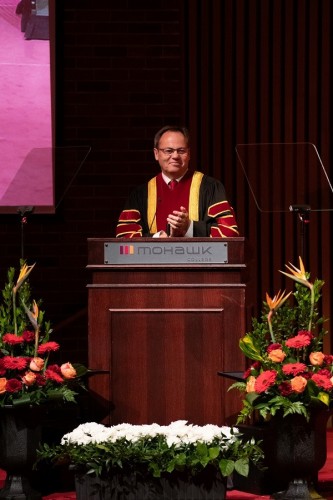 The Mohawk College Board of Governors is pleased to announce that Ron McKerlie will continue to lead the college for the next five years.

President McKerlie, who has served Mohawk College since 2014, received the support of the Governors to extend his contract for an additional five-year term. Prior to being named as the eighth president of Mohawk College, McKerlie served as Ontario’s Deputy Minister of Open Government after a distinguished 25-year career with Rogers Communications and the Bank of Montreal.

In addition, the Board of Directors of the Mohawk College Foundation, the arm’s-length fundraising body for the college, concurrently announces that it is also renewing McKerlie’s contract as president in line with the college’s extension.

“Under Ron’s tenure, Mohawk College has flourished as a national leader among postsecondary institutions. Over the past five years, the college has improved and expanded facilities at all three campuses, developed a strong reputation in applied research and is effectively executing on an ambitious five-year strategic plan. Ron has had a guiding hand in these achievements while remaining committed to the success and well-being of Mohawk students and the communities we serve. The Board of Governors looks forward to working with Ron for the next five years.”

– Katrina McFadden, Chair of Mohawk College Board of Governors

“Over the past five years, Mohawk College Foundation has financially supported transformational projects at the college and forged strong new partnerships while offering financial assistance to thousands of students through bursaries and awards. Ron’s continued leadership will provide stability and focus in the coming years, as we work to support increased community engagement and the growing needs of our students.”

– Glen Steeves, Chair of Mohawk College Foundation Board of Directors

“On behalf of all Mohawk students, The Mohawk Students’ Association looks forward to continuing to work alongside President Ron McKerlie as he begins his second term. We believe that Ron and the staff at Mohawk College have helped shape this community into the great place it is today. Over the past five years, Ron has proven to be a champion of student success and growth. We are excited to continue our partnership and see what the next five years will bring for future Mohawk students.”

“I am grateful for the support of the Board of Governors of Mohawk College and the Board of Directors of the Mohawk College Foundation. We have accomplished a great deal together over the past five years and have laid the framework for a bright and exciting future. I am happy to be able to continue working with Mohawk faculty and staff to educate and prepare job-ready, future-ready students.”