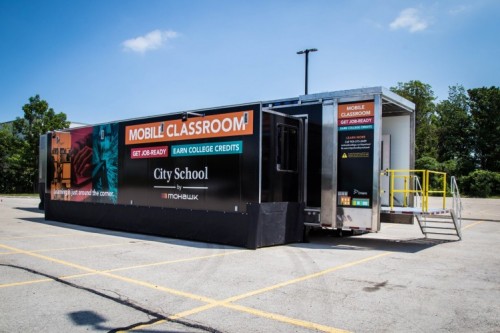 The 53-foot custom-built trailer will be used to deliver free college credit courses, workshops and pre-apprenticeship training as part of Mohawk’s expanding City School initiative. Mohawk launched City School in October 2015 to bring the college into the community and reduce barriers to postsecondary education. Mohawk also operates City School locations at the Eva Rothwell Resource Centre in North Hamilton and in the Central Library in the downtown core.

The City School mobile, which is funded by the Ontario Ministry of Advanced Education and Skills Development, will travel throughout the city and region. The mobile, with 1,000 square feet of classroom space, is currently equipped with 12 welding simulators to be used for welding techniques training.

Visitors to Supercrawl will also get to cast their votes for Mohawk’s medical phantom project. The student-led project, which uses 3D printers to create artificial body parts for medical testing, is among the 10 provincial finalists for the William G. Davis Innovation Award. Voting will take place in the Colleges Ontario trailer arriving at Supercrawl on Saturday. The trailer is on a province-wide tour to celebrate the 50th anniversary of Ontario colleges. The trailer will also showcase outstanding college graduates, feature a head-to-head quiz show challenge and highlight six college innovations, including a 3D-printed Braille map of Mohawk’s Fennell campus.

The Mohawk College City School mobile and the Colleges Ontario trailer will be parked at the intersection of James and Wilson streets in downtown Hamilton.

Mohawk College taking City School on the road to Supercrawl