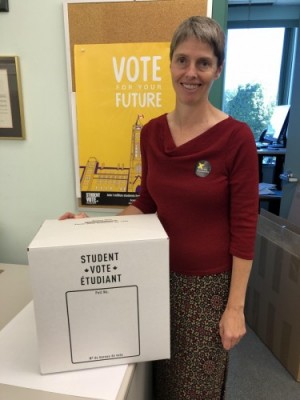 Voting is a right of citizenship in Canada. It’s one of the ways we participate in our democracy. But getting people out to vote come election day can be a challenge.

The Student Vote is a project organized by CIVIX, a non-partisan, national registered charity dedicated to building the skills and habits of active and engaged citizenship among young Canadians. The Student Vote gives K-12 students a chance to participate in a parallel election, teaching them to be active and informed voters.

Mohawk’s LINC program joined forces in CIVIX with 2018 for the provincial and municipal elections that were held that year, and will participate again as part of the October 2019 federal election. One of the Mohawk organizers is Professor and Coordinator for Programs for Newcomers, Mary Anne Peters. LINC (Language Instruction for Newcomers) is an English program for newcomers funded by Immigration, Refugees and Citizenship Canada.

Mary Anne is an ESL teacher, and used to work SHAIR International Resource Centre, a community-based organization with a mandate to increase engagement in community development issues. Mary Anne was teaching a LINC for Youth Video class, getting the students to make campaign videos and analyzing different strategies for persuasion when she realized that the CIVIX Student Vote program would be a great fit for the program.

At first, the students weren’t into it, says Mary Anne, but as they got more involved, they became more passionate about it.

Mary Anne says that many people believe they can’t make a difference by voting. Especially if they come from countries where it has been the same leader for decades, or in some cases, voting doesn’t happen at all. What she has found is if they have the chance to explore the parties platforms and discuss it amongst themselves they start to become much more engaged.

None of Mary Anne’s students are eligible to vote in the upcoming election. That right will come later once they become citizens. Despite this, Mary Anne says they take the Student Vote seriously. During the provincial election last year, one of her students got so interested he ended up volunteering on a local campaign.

“It would be great to know if in 5 years they vote as soon as they are eligible. The stats show that people who vote when they first become voters will continue to vote throughout their lives.”

The Student Vote parallel election takes place in schools across Canada this week, involving an estimated 1.2 million students. The Mohawk vote will take place on Thursday, October 17, with about 150 students taking part. The mock vote will be for the college’s riding of Hamilton-West-Ancaster-Dundas. Results from the Student Vote election will be released after polls close on October 21.

Mohawk’s postsecondary adult ESL program is believed to be the only one from across Canada to participate in the Student Vote.