Excellent coaches and great facilities give Mohawk the competitive edge 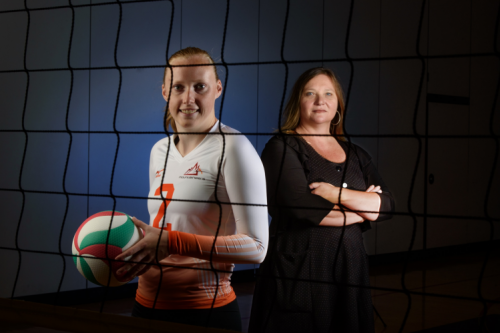 She was focused on nursing and all six schools had excellent academic and athletic programs. Pellow chose Mohawk College because it stood out as the best fit.

“It just drew me right in,“ said the second-year Bachelor of Science in Nursing student. “I definitely made the right decision. Athletically, I couldn‘t be happier and academically, I‘m 100 per cent sure I made the right choice for me.“

“When Mohawk has a similar academic program to another college, athletes will look at the facilities available. We know the centre has influenced decisions to attend here.“

About 180 varsity athletes suit up to represent the Mohawk Mountaineers in the Ontario College Athletic Association (OCAA). “I think we are really fortunate because we have an excellent varsity program at Mohawk,“ said Kevin Duffy, head coach of the women‘s basketball team. “I can tell you that whenever I invite parents or rep teams to see our team, they are impressed with the quality of athletics and facilities at Mohawk.“

Ball says one-quarter of Mohawk‘s athletes have averages above 85 per cent. “Our success isn‘t just on the court or the field but in the classroom. Our athletes are here for school first.“