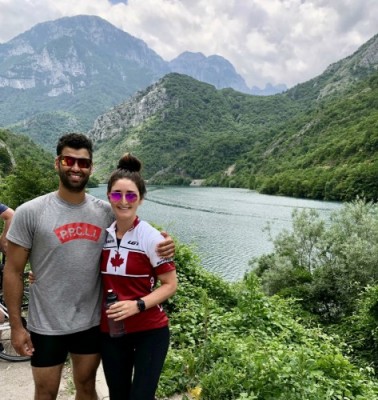 Carlo Alfau was born a soldier. It was all he wanted to do. Wearing a uniform and serving his country was everything to him and he was living that dream as a member of the Canadian Armed Forces. Then one day, the dream ended.

Carlo was diagnosed with Post Traumatic Stress Disorder, or PTSD. For soldiers like Carlo, PTSD is the enemy that is never seen but is always present. It is the memories that linger long after the war ends and for Carlo, it was also the end of his military career.

Eryn Jewitt is a Health Studies professor at Mohawk College. She is also Carlo’s wife. Eryn experienced working as a Physical Exercise Specialist and Exercise Physiologist for the Canadian Armed Forces. Her job was working with ill and injured soldiers to improve mental and physical conditions as they adjusted to life outside a war zone, and for soldiers like Carlo returning from Afghanistan, life outside of the military.

Eryn and Carlo married and moved to Ontario, where Eryn began teaching at Mohawk.

Being married to someone with PTSD isn’t easy, says Eryn. The rollercoaster of challenges from Eryn’s family background and Carlo’s 12 years of service has been a long and winding road to their home life. We take two steps forward and one step back and one of those challenges, says Eryn, is a lack of community. The armed forces is a tight-knit group. Members share a strong sense of identity and belonging with similar experiences. Losing that connection can be very difficult, especially for veterans like Carlo who are not ready to give it up.

“I cannot control or fix my husband’s recovery but I can walk (or in this case, ride) beside him and support him.”

Fortunately, there are groups like Wounded Warriors Canada (WWC), a national non-profit group that began as a support fund in 2006 to help soldiers that were wounded in Afghanistan. Today, WWC is Canada’s leading, wholly independent veteran’s charity focusing on mental health. In 2017, they funded $1.8 million in programming for injured veterans, first responders and their families.

Eryn and Carlo recently joined the cause and signed up for the 600-kilometre Wounded Warriors Canada Battlefield Bike Ride across Bosnia and Croatia to raise funds for WWC programs and awareness about Operational Stress Injuries such as PTSD.

For Eryn, her inspiration to be part of the ride was realizing, “I cannot control or fix my husband’s recovery but I can walk (or in this case, ride) beside him and support him.”

Eryn, Carlo and about 90 other riders – mostly veterans and a few first responders – did the ride from June 9 to June 15, and raised more than $400,000 for WWC. Within the larger group were smaller teams, including the one Eryn and Carlo belonged to called “The Patricia’s” named in honour of the regiment Carlo and majority of the team served with, the Princess Patricia Canadian Light Infantry. The team raised more than $36,000, which will go towards training a service dog for a local veteran and his family.

Aside from being a very successful fundraiser, the ride also changed the lives of the people who participated. Some of the veterans who rode had served in Bosnia in the 1990s as peacekeepers in a war that claimed many lives. Eryn said many of them hadn’t been back since the war, so the experience was very raw for them. The very people who saw them as enemies 25 years ago were now opening their doors to them for a place to sleep and sharing homecooked local meals.

There was a lot of emotion over the six day ride, says Eryn and it was amazing to experience the power of vulnerability as veterans opened up about the service and sacrifice that left them forever changed with physical and mental scars. She said “having conversations while riding on the same roads and hearing stories that some have kept inside for 25 years was truly life changing.”

It also helped Carlo and their relationship, she says. “It was a challenging ride and when you suffer together you bond. Sharing experiences of a real-life history lesson brought us so much closer and being part of a passionate like-minded community are big steps in the right direction for recovery and not feeling alone.”

Now that they are back in Canada, Eryn wants to use the experience with WWC and her relationship with Carlo to help Mohawk students.

“We have students who suffer with mental health issues every day. I want them to know that it’s okay to not be okay and be educated on the resources available to talk about it. I want to share my experiences with the students I teach so they gain a better understanding of the people they may one day be helping and start the conversation of being vulnerable is being courageous.”

Eryn is also planning to take part in another WWC event this August. The Highway of Heroes Ride will take place from August 25 to 26. The riders will travel the 170 kilometre stretch of highway from Canadian Forces Base Trenton to the Don Valley Parkway in Toronto where the funeral convoys carried the soldiers who had lost their lives in Afghanistan.

For more information on the WWC Highway of Heroes Ride visit: http://wwcan.convio.net/site/TR/Events/General?px=1032019&pg=personal&fr_id=1070