ARTIFICIAL INTELLIGENCE IS CHANGING HOW WE WORK 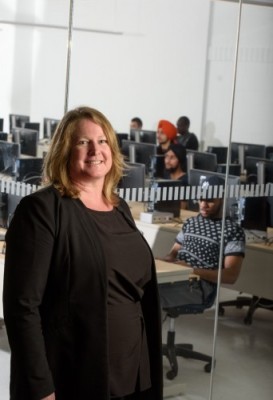 Rapid advances in artificial intelligence, machine learning, computational power, and user interfaces, such as voice recognition, are making it possible to automate many of the tasks of knowledge workers or, in some cases, resulting in the automation of entire jobs.

“The automation in the knowledge space is directly tied to the Internet of Things,” said Tracy Dallaire, Senior Director of IT Strategy and Enterprise Architecture, a role formed at Mohawk a little more than a year ago. “All kinds of devices, like heating systems and lights in a building or robots in a factory, are collecting vast amounts of data. That flows to an algorithm that determines when a machine needs maintenance or to a system that maximizes energy, that automates work done by humans,” she said.

“Eventually, there will be no human intervention. These systems will be smart enough to send messages back so that the machines themselves will learn and change their behaviour.”

Automating the collection and real-time analyzing of data will leave humans to focus on higher-value tasks, says Dallaire. That is evident in a number of processes at Mohawk, everything from automated password resets that were once handled by IT staff, to automated reports of student registration numbers.

Auditors, quality control specialists, and cybersecurity experts rely on artificial intelligence tools to find anomalies and red flags in vast amounts of data. Humans are needed to set the context, parameters and risk scenarios, and then to investigate and make decisions based on what is flagged in the data.

“It will still be up to humans to find something meaningful in the data,” said Dallaire.

“Mohawk is well-positioned to be a leader in this space. We have students, faculty and applied researchers working closely with industry on innovative data projects, creating new dashboards and applications.”

The McKinsey Global Institute estimated in 2013 that the economic impact of the known applications of automated work will be $5.2 trillion to $6.7 trillion in 2025.

ARTIFICIAL INTELLIGENCE IS CHANGING HOW WE WORK
Newsroom