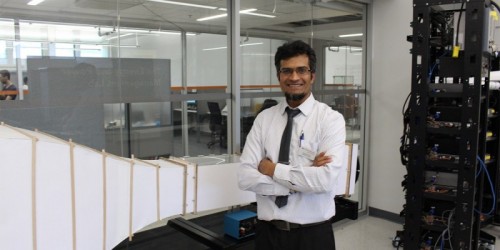 Rubaid Khan was keen to help when he was contacted by an entrepreneur wanting to test a wind turbine prototype.

The man wanted to put his turbine on a rooftop and measure the power it generated. But Khan, an energy systems engineering technology professor, knew such an experiment was rife with problems.

“Wind being unpredictable and something we can’t control, we wouldn’t be able to predict how much energy the turbine produced,” Khan said. “We couldn’t leave it to the elements.”

So Khan proposed that college faculty and students build a wind tunnel to provide a constant breeze for the turbine prototype. The turbine would then be installed inside the wind tunnel where the elements would be entirely controlled.

The industry partner funded construction with labour and materials in kind. An IDEAWORKS Applied Research and Innovation in Education (ARIE) grant allowed Khan to hire two energy systems engineering technology students last summer to do research on existing wind tunnels, design a new one based on their findings, and use software to model the tunnel and predict how much wind it could produce.

“They blew me away,” Khan said of the students’ work. “They were teaching me things.”

By the end of the summer, a 20-foot-long wind tunnel was built. The project was a success so far.

The same couldn’t be said about the turbine, which the industry partner hoped to commercialize for installation on highway lighting standards, powering them and sending the excess to the grid.

The turbine prototype performed poorly in the wind tunnel’s controlled conditions, which mimicked local wind speeds based on weather data the students collected. The turbine produced only one watt of power.

“That’s barely enough to turn on a lightbulb,” Khan recalled.

The project team then turned its attention to the wind turbine, offering recommendations to improve the design.

The industry partner hopes to continue working with Mohawk College to refine his turbine design. Meanwhile, the IDEAWORKS Energy and Power Innovation Centre has a customized wind tunnel that can be used as a teaching tool in several programs, including mechanical engineering technology and aviation technician.

“This was an applied research project and not everything is going to work,” Khan said. “This project helped our industry partner realize there’s work to be done before his turbine can be commercialized.”

IDEAWORKS is Mohawk’s hub for applied research and innovation. Learn more about how you can get involved in research through IDEAWORKS at www.mohawkcollege.ca/ideaworks

Mohawk College educates and serves more than 31,700 full-time, part-time and apprenticeship students at three campuses in Hamilton, Ontario. Mohawk is among the leading colleges in Canada for applied research and is ranked number one for student and graduate satisfaction among colleges in the Greater Toronto and Hamilton Area.