Mohawk is embarking on a new initiative with marine maintenance and ship- building company Heddle Shipyards and the Hamilton Oshawa Port Authority to launch a City School mobile program.

It will teach ship repair and maintenance skills to at-risk youth and others during a 10- to 12-week program at the Heddle shipyard on the Hamilton Harbour. The company is providing a scrapped boat for program participants to work on.

The partnership is an offering of City School’s Skilled Trades Awareness and Readiness Training (START), a series of initiatives aimed at reducing a shortage in skilled trades.

Mohawk staff will develop and deliver the curriculum, while seasoned Heddle employees will act as teachers and trainers for an anticipated group of 20 to 30 participants.

“The idea is to give them a taste of the multiple trades in the ship repair industry,” said Patricia Reles,vice president, people and culture at Heddle. “We hope they find something they are passionate about and then they can go to Mohawk to learn a skilled trade and possibly pursue a career with us.”

Heddle is also establishing two bursaries for trades students at Mohawk, including one for women, says Reles.The company participates in a job fair at Mohawk and frequently hiresgraduates for frontline and office roles. Heddle staff also speak to skilled trades students and is in constant contact with coordinators and faculty.

“We want to get the word out there that we support skilled trades. We struggle to find talent for our shipyards.”Working in marine requires a special set of skills.“

“We are open to working as closely as we can with Mohawk.”

Heddle, founded by Rick Heddle and Blair McKeil, has operated for30 years and has directly engaged with Mohawk for the last five, says president Shaun Padulo.

McKeil is a major benefactor of Mohawk’s McKeil School of Business and has been behind the push to work with the college to address talent needs, he says.

“To have one of the most successful colleges in Ontario and in Canada in our backyard is very exciting for us and will be very important to us as we expand,” said Padulo.

The company’s Port Weller operation has grown from 12 people to 150 and that kind of growth is expected for Hamilton, too. Heddle is building critical mass to go after large government contracts, under the $100-billion federal National Shipbuilding Strategy.

“We are working hard to be involved in that. There is a huge opportunity there for us, but we need the people to feedthe growth.” 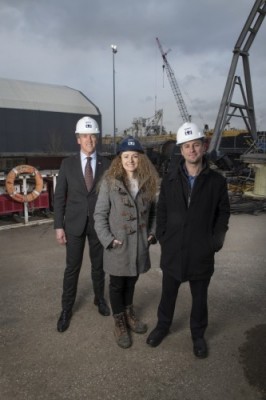