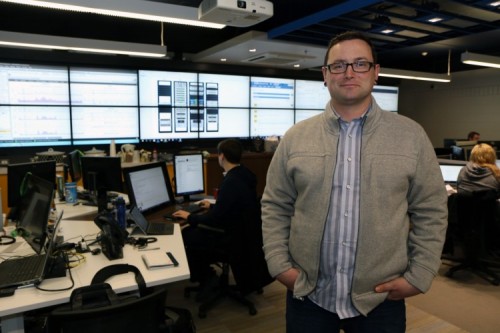 Mohawk College taught Shaun Iles that he could be more than a high-school dropout working in a skateboard shop.

He resolved to do the same for others.

“Everything I’ve become is the farthest thing away from where I thought I would end up,” said Iles, who has been a full-time faculty member at Mohawk since 2008.

Those who knew him as a troubled, rebellious youth are shocked at what he’s made of himself, he says.

“People thought I would be in jail. I had no regard for authority.”

Iles, 35, who teaches online and hybrid courses in sustainability, sociology, applied research and foundations, is now a recognized and sought-after authority on building gamification into teaching.

His methods include having students in his sustainability course apply their learning in a simulation in which they must build a self-sustaining community for 500 people on an island owned by a mining company.

“As they get further into the course, they make better decisions. One student told me he played the game for 24 hours straight. The simulation really gives them a visual representation of the decisions that are made all around us."

“I was teaching them all this theory about the triple bottom line and the complexities of balance and sustainability. They could regurgitate the definitions but they had little idea about how it all worked.”

So he designed a game in which they had to figure out how to provide housing, power, food and things to do for the island’s inhabitants. Of course, they must constantly make decisions as the population grows.

“As they get further into the course, they make better decisions. One student told me he played the game for 24 hours straight. The simulation really gives them a visual representation of the decisions that are made all around us,” said Iles.

He also incorporates game techniques by having students progress through the curriculum by unlocking modules. They can score bonus marks – like points in a videogame ­– by adequately performing on quizzes in each module.

“Gamification allows students to challenge themselves in each module. Some students don’t even think of it as gamification. They just see the content.”

“I’ve had students get angry if they haven’t earned a video. They kind of think of it as a badge almost.”

The approach engages a videogame generation and allows students to set their own learning pace.

“I’m not going to say it works for every student but the majority are motivated by it.”

Iles has been invited to education conferences around the world to share his ideas. Iles’ work at Mohawk led to him being named one of five global leaders in developing online content on Desire2Learn platforms and earned him a Pearson Cite digital education award.

“We heard from a lot of educators who said they would love to use a videogame but they couldn’t build one or find one that has enough curriculum built into it.”

So Iles and his partners, two developers and a graphic artist, built the UnderStudyEdu platform and design videogames that make learning fun for young students and allow teachers to collect data about a student’s understanding of the curriculum.

Flyte Studios has entered into partnerships with the largest learning management systems, including Desire2Learn and Canvas.

“It’s great for both sides because it provides a gaming suite for them and we need clients and they have them.”

Though Flyte Studios is not affiliated with Mohawk, Iles says there has been plenty of support and advice from the college community. Resources available to help faculty build engaging course material have been crucial.

Iles won a Mohawk President’s Award in 2013 for his work on rolling out an iPad-driven curriculum for engineering technology students and was a nominee last year for a teaching excellence award from Colleges and Institutes Canada.

None of Iles’ success – the teaching position, the awards, the international speaking engagements, founding his own company – seemed remotely possible when Iles dropped out of his Oshawa high school in Grade 12.

He had always hated school and was tossed out of a couple of high schools before he dropped out.

“Nothing seemed to appeal to me. I had a really bad taste for authority. I didn’t like to be told what to learn and how to learn it.”

Mohawk changed all that. He was working in a mall skateboard shop when he took a shot at college.

“I’m very emotionally connected to Mohawk. Before coming here I had never read a book cover to cover,” he said.

“I met faculty here who literally changed my life and changed my perspective on how important it is to be learning.”

After completing a general arts and science diploma, he went on to get a bachelors in sociology from McMaster and a masters in education from the University of Toronto.

While studying in university, Iles set a goal to return to Mohawk and give others the chance he was given.

Iles says he doesn’t regret his unusual path to education. It allows him to forge an instant connection with disengaged students. It also makes him incredibly grateful for what he’s doing.

“I wouldn’t be who I am or where I am in my career and life without that path and Mohawk College."