For the Verkaik family, nursing is in their DNA 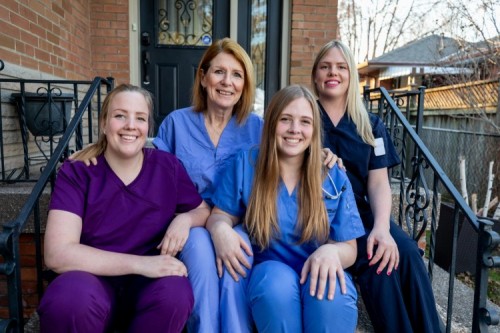 Janet Verkaik’s nursing career has spanned 41 years and four countries and she loves her job.

“I can’t imagine doing anything else, honestly,” says Verkaik, who works in cardiac surgery. “Nurses get to be with people at the most vulnerable stage that they could ever possibly be at. We get to impact that moment and go home feeling encouraged by having done that for somebody.”

The Oakville resident’s passion for her profession has been inherited by three of her five children. Sisters Rachel, Samantha and Haley each chose to follow in their mother’s footsteps into nursing, though each took a slightly different path to get there. Rachel and Samantha (two-thirds of Janet’s triplet daughters) earned Kinesiology degrees before pursuing Nursing – Rachel chose a university program and Samantha chose Mohawk College’s two-year Practical Nursing Program.

Haley, the younger of the nursing Verkaiks, took time off her studies to work after high school but she had been fascinated with hospitals since she was a child and knew she would enter Nursing at some point.

“Eventually, I just new I needed to go back and take the courses,” says Haley, who is a Mohawk RPN student now. She hopes to pursue her Bachelor of Science in Nursing (BScN) degree from McMaster University, through a collaborative partnership between the two institutions, when she graduates in December. “I thought I could either go back and take the credits I needed to do the four-year university program or do it this way, which would take the same amount of time and I get more hands-on experience. I get the best of both worlds – the college and the university. It made more sense to do it this way.”

Samantha, a 2017 graduate of the Mohawk RPN Program, opted to pursue her BScN as well and is midway through three consecutive semesters of study.

“I appreciated that I studied through the summer, though some people don’t like that,” says Samantha. “For one thing, it was faster and I liked going to school in the summer. It felt a little more relaxed with less people at school.”

As Janet plans for her retirement in the near future, she takes comfort knowing she has inspired three new Verkaiks to fill her shoes.

“I know my daughters and I know they will make great nurses,” Janet says. “They are the kind of compassionate people that nursing deserves to have.”

Mohawk College has been providing a quality, higher education experience to students in Hamilton, Ontario and the surrounding area since 1967. The college educates and serves more than 31,700 full-time, part-time, apprenticeship and international students at three main campuses in Hamilton, at learning hubs across Hamilton through City School by Mohawk, and at the college’s Aviation Facility at Hamilton International Airport. Mohawk is among the leading colleges in Canada for applied research. It has been named one of Canada’s greenest employers for five years in a row, and is also home to the country’s largest net zero energy institutional building. More than 120,000 people have graduated from Mohawk since it was founded.

For the Verkaik family, nursing is in their DNA