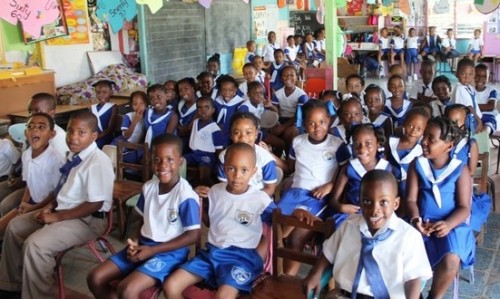 Twelve Mohawk students and handful of faculty and administrators will head to Jamaica this November to bring modern technology to students at Bowden Hill Primary School.

Bowden Hill Primary is located in Jamaica’s eastern region, not far from the capital city of Kingston. According to Jamaican media, the school was ordered closed in 2015 due to low enrolment. The local community rallied around the school and the government agreed to reopen it if the community could boost enrolment numbers. By 2017 the school had 85 students and came to be known as the “beacon on the hill.”

Rochelle Reid is Mohawk’s Director of Student Life and General Manager of the David Braley Athletic and Recreation Centre. Rochelle learned of Bowden Hill’s story while on a trip to the country a few years ago. She visited the school and met with the principal who showed her around. Rochelle says she was surprised to see things like a computer lab with no computers.

“I came back so incredibly inspired to do something,” she said, and with Mohawk making globalization a priority, she knew there was a fit with the college.

The opportunity to do something came with the introduction of the Province’s Career Ready Fund. The Jamaica trip and other international projects including a project in Chalkida, Greece are among a series of new experiential learning opportunities being introduced by Mohawk and funded in part by the Province. Mohawk received $1.1 million through the fund.

The fund is part of the Career Kick-Start Strategy and helps publicly assisted colleges and universities, employers and other organizations create experiential learning opportunities for postsecondary students and recent graduates.

The 12 students who are making the trip had to apply for the program, said Rochelle. The students are from Mohawk’s Software Development, Networking Engineering and Photography programs. The Career Ready Fund provides $1,500 towards their expenses for the trip. The students have to raise the rest themselves. Their collective goal is $10,000.

Once in Jamaica the students will focus on installing new computers, setting up a network for the school and providing workshops for students and teachers. They will also plan and run a community engagement event at the school that will involve the school and its surrounding community. All of the students must attend pre-departure orientation sessions that cover things like safety and cultural awareness.

Rochelle says the November 2 – 9th trip will be the first of two planned trips to the school. Another trip is planned for 2019 and is expected to focus on completing some renovations to the school itself. Students from Mohawk’s Construction and Building Sciences programs will be part of that experience.

If you are interested in learning more about the Bowden Hill project please contact Rochelle at rochelle.reid@mohawkcollege.ca.

If you would like to donate to the students who are going to Jamaica you can visit their GoFundMe page at https://www.gofundme.com/mohawk-helps-students-in-jamaica?teamInvite=S6MqDmAnCmBJfe0aIOE5DVcqNiMjyci9duVjTYHPXXuXXKGrMJ41M0CTUuucjeHj

The group is also holding a Beach Day Fundraising event in the MSA Plaza and the Fennell campus on Wednesday, September 12 from 11 a.m. to 1 p.m.