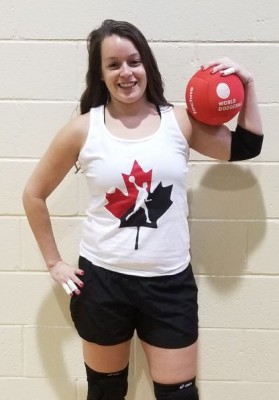 Olympic dodgeball? It’s a possibility now that the sport has been added to the Olympic watch list, and if it happens Mohawk might have a good reason to cheer on Canada’s national team.

Theresa Merwin is the Operations Manager for Mohawk’s School of Community, Justice and Liberal Studies. She’s also a member and co-captain of Canada’s National Mixed (men and women) Dodgeball Team. There are men’s and women’s teams as well. Dodgeball is one of the few sports to have a mixed team.

Canada is new to international Dodgeball scene. The national team was only announced this fall. The sport is gaining in popularity in Canada and the U.S., but in places like Europe, Asia and Africa the sport has a much stronger following. Accessibility is part of the appeal, she explains. Dodgeball teams can range in age from people in their late teens to people in their late 40s.

Theresa was introduced to the game when we she was a student in 2010. “It was just by chance,” she said. “I had a friend that one day asked if I was interested in playing dodgeball with Hamilton’s Extreme Dodgeball league.”

She had a blast, she recalls, and it was a great workout too. There’s a lot of running, jumping, and as the name suggests, dodging. Games only last 30 minutes with two 15-minute halves. There are six players per side and any given time there could be up to five balls in play, so there’s a lot going on. There are rules but at its core the game is very simple: any hit to the body counts and the last team standing wins.

In early December, Theresa and her team travelled to Washington D.C. for the America’s Cup. They lost to the U.S. but she’s hoping they’ll get their revenge next summer when they travel to New York for the World Championship to be held at Madison Square Gardens.

If you want to find out more about Canada's National Dodgeball team visit: http://www.dodgeballniagara.com/