A development studio with deep ties to Mohawk College is bringing a video game and virtual reality experiences to life that will celebrate the contributions of Canadian aircrews and the Avro Lancaster in the liberation of Europe during World War II.

One Mohawk professor and alumnus also has a very personal tie to the project.

It all began with Mohawk Professor Andrew Spearin, who was inspired by watching the Lancaster fly over his house in Dundas.

“I would imagine what it would be like to be in that plane. I was drawn to it.”

Growing up in Hamilton as a soldier and bagpiper with the Argyll & Sutherland Highlanders of Canada, Spearin was often around World War II veterans and more recently he began volunteering as a re-enactor at the Canadian Warplane Heritage Museum.

There, he saw one of only two Lancasters in the world that can still fly. He also saw a need for technology to help tell stories, so he set up Sharp End Studio (SES) in 2019 to develop Valiant Effort, which will tell the stories of the Royal Air Force Bomber Command.

“I think it’s really important to carry on the stories of that extraordinary generation. We are losing them so quickly.”

Half of the 14-member team at SES are alumni, professors or students at Mohawk.

One of them is Shea Floren, a Professor of 3D animation and motion graphics. Floren and Spearinmet at a meeting of Mohawk’s Game Development Club and immediately connected over Spearin’s Lancaster game idea.

“We want to bring this history to the modern day. Video games can really tell stories that will connect with youth,” said Floren, who graduated from Mohawk’s Animation program in 2012.

Floren’s great-uncle Harold Floren was the first to pilot a Canadian-built Lancaster in combat overseas. He didn’t know much about his great-uncle’s service, but wanted to learn. During research for Valiant Effort, Floren was able to see his uncle in a National Film Board documentary.

“It was amazing to get to see and hear him in this video. If we can do that for other people, all those with a connection to this plane, that’s what really drives me and Andrew.”

Harold Floren flew many harrowing missions before he and his crew were killed when their Lancaster was shot down on Jan. 15, 1944. Harold Floren was just 22and is among the more than 10,600 Canadians killed in service of Bomber Command.

“For me, it means a lot to be able to honour the sacrifice of not only my family but all those who went off to war at a very young age,” said Floren. “I feel very connected to this and to conveying the Canadian impact in the war and how much our men and women contributed. We found in our research that it’s often left out of the story.”

The studio is working on two projects: a video game that will allow players to take on missions either as a a single player or in cooperative teams; and virtualreality experiences that can be used in aviation and military museums.

“VR visitors will sit shoulder-to-shoulder with the crew, experiencing D-Day,” said Spearin, who teaches a number of software development courses at Mohawk. Gamers will experience what it was like to enlist, train, get sent overseas, and to take part in combat missions.

The museum has granted full access to its archives allowing Sharp End to pore over flight logs, airfield reports, and film footage to develop scripts and capture every detail inside the Lancaster. The team was able to digitize helmets, uniforms and gear found among the museum’s 15,000-item archives using technology called photogrammetry to capture every last detail in 3D space.

“We are giving people the chance to be in the cockpit of a piece of history,” said Lissa Rodda, operations and project manager. “That’s really cool because very few people in the world got to experience that.”

She calls the building of these worlds “digital heritage” that will connect to future generations.

“We are working hard to be as authentic as we can tothe time period. War aficionados will see the work that has gone into that.”

“I am grateful to be given the opportunity to be a part of a passionate and motivated team,” said Jessica Costello-Murray, a third-year 3D Animation student, who is working as an artist on Valiant Effort. “Because of the 3D Animation course and the dedicated staffat Mohawk College, I was able to learn the necessary software and skills that prepared me for a career in the gaming industry.”

“Without attending Mohawk College, I wouldn’t have met a great number of people who have helped me get to where I am now and continue to be valuable professional contacts. I have learned that, while skill sets are important, the connections you make can be one of the most important keys to asuccessful career.” 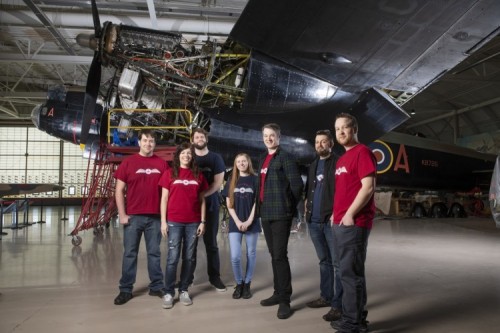