“I DON‘T WANT DEAF PEOPLE TO THINK THEY CAN‘T DO IT.“

Nursing graduate is a trailblazer and inspiration to others 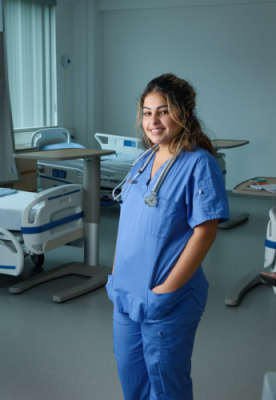 Natasha Mando refuses to let the fact she is Deaf stand in the way of her dreams. She recently graduated from the Practical Nursing program at Mohawk College, receiving the Leadership Accessibility Award for 2018.

As the winner of that award, she is described as a “proactive student who demonstrates leadership qualities in her determination and drive to be successful in her program and is an inspiration to others.“

There were some challenges, including using a stethoscope.

“There always has to be the first person to do something. I knew I could be that trailblazer so I was not going to give up,“ Mando said through a sign language interpreter.

She found an answer to the stethoscope challenge in a Colorado-based company called Thinklab. It produces stethoscopes for hearing impaired clinicians, including one Mando used, that displays the sound of a patient‘s heart and lungs visually.

She practised extensively with her instructors to learn to interpret what the sounds of crackles and wheezing look like in colour and shape on the display. She also learned to take blood pressure readings by watching the movement of the needle.

Mando says she found great support from her instructors and on her clinical placements at Hamilton Health Sciences‘ Juravinski and General hospitals. “The staff were so great to me, especially at the General. My preceptor started learning American Sign Language right away. I felt very welcomed and included,“ she said.

“She was so supportive of me and always had my back.“

Mando, 27, says life as a Deaf person in a hearing family and a hearing high school made her a master at communicating through gesturing and body language. That was especially handy with hearing-impaired patients or those who didn‘t speak English. “Anyone who has faced barriers understands each other.“

“I really pushed myself to get the most out of my clinical placements and had to learn to step out of my comfort zone in order to provide the best care for the patients I was working with.”

She has previously explored early childhood education, accounting and health, wellness and fitness programs at Mohawk but truly found her path in nursing, she said. Mando has passed her nursing exams and is now awaiting her licence.

Mando was a confident advocate for herself, said Maria Riva, Associate Dean of Nursing, and that helped faculty find ways to adapt to her needs.

“As much as it was a learning path for her, we also learned. As a team, we embraced it. She‘s moving on to the next chapter of her life and we are very proud that we could be part of her journey.“

“I DON‘T WANT DEAF PEOPLE TO THINK THEY CAN‘T DO IT.“
Newsroom