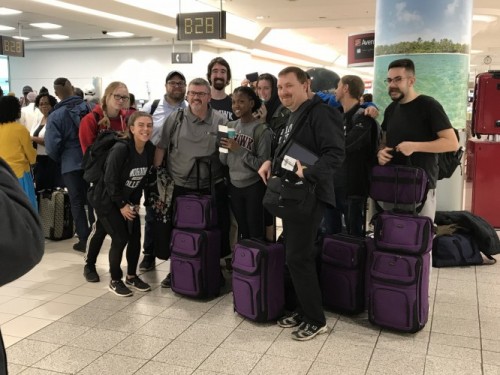 Twelve Mohawk students and handful of faculty and administrators left for Jamaica this morning to bring modern technology to students at Bowden Hill Primary School. The students will focus on installing new computers, setting up a network for the school and providing workshops for students and teachers. They will also plan and run a community engagement event at the school that will involve the school and its surrounding community.

Bowden Hill Primary is located in Jamaica’s eastern region, not far from the capital city of Kingston. According to Jamaican media, the school was ordered closed in 2015 due to low enrolment. The local community rallied around the school and the government agreed to reopen it if the community could boost enrolment numbers. By 2017 the school had 85 students and came to be known as the “beacon on the hill.”

The Jamaica project is part Mohawk's Global Experiences initiative and funded in part by the Province’s Career Ready Fund. The Jamaica trip and other international projects including a project in Chalkida, Greece are among a series of new experiential learning opportunities being introduced by Mohawk. Mohawk received $1.1 million through the fund.