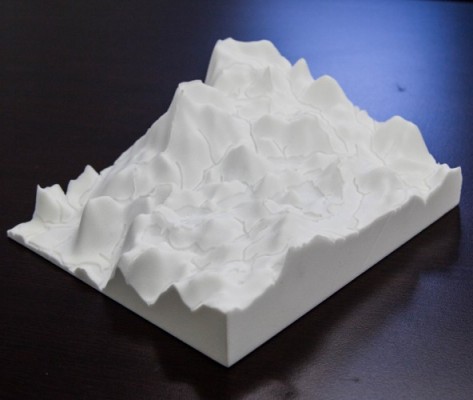 Maps, without question, fascinate us.

Is there anything more inspiring or useful than our world presented to us in the miniature? Scale models of land and sea have been motivating explorers and inventors for centuries. In our modern world, they’ve served as the foundation for new technologies and tools such as GPS and Google Maps.

And now maps have inspired a team of Canadian experts and researchers to use additive manufacturing to turn 2D into 3D.

It was the potential of 3D printing and additive manufacturing to accurately portray geographical features that inspired Fred Norouzian of Environment and Climate Change Canada to call Mohawk College’s Additive Manufacturing Resource Centre (AMRC). Norouzian was looking for help to produce a scale model of the Turkey Lakes Watershed. The watershed, located 50km north of Sault Ste. Marie, is the subject of a multi-disciplinary research study on the anthropogenic perturbation of Canadian Shield ecosystems and is one of the longest running watershed studies in North America.

“It’s important for our focus in water chemistry and hydrology to show the proper relative elevation of each lake and stream with respect to the other lakes and streams in the watershed- both upstream and downstream,” explains Norouzian.

His initial solution should have been a topographic map. Topographic maps, or raised relief maps, are commonly used to visualize an area’s landscape. They are traditionally made of vinyl molds, using information from GPS data, field surveys, and aerial photography.

But what Norouzian wanted was a scale model that incorporated more than a birds-eye view map of the area. He wanted to use the research data collected by researchers from the various government agencies involved in the area and create a three-dimensional teaching and training tool for the team.

The 3D printing of topographical maps, created on-demand and available online, has been gaining in popularity, primarily for its ability to commemorate travel experiences- say a trip to the Grand Canyon or to Whistler. But for more remote areas, 3D printing from existing aerial maps doesn’t work- it will only result in two undefined landmasses with no clear distinctions between topography features such as rivers and the lakes.

That was far too imprecise for Norouzian and his colleagues. What Environment and Climate Change Canada needed was a custom solution that would use various 2D data sources to generate a 3D map of the area.

“While the data that Environment Canada gave us had all the contours marked, it was like a piece of paper with no thickness. We had to convert it to a solid model and then add in the lakes and water so you can fully see the area in 3D.” 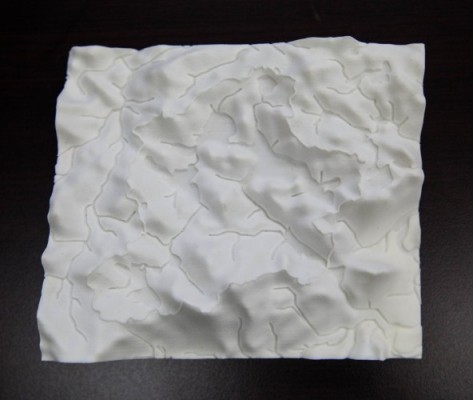 For the team at the AMRC, accustomed to working with industry on manufacturing and automotive projects, it was a project that captured their imagination with the following question:

How do you combine 2D and 3D data into a single, 3D printed output?

“It’s easy to go to Google Maps and find major physical landmarks and print them out,” said Simon Coulson, manager of the AMRC. “But if you try to find this watershed using an online map or a similar tool, there isn’t enough data available to produce an accurate model.”

“However, when you combine the accuracy and the level of detail available from Environment and Climate Change Canada’s various data sources, that’s when you see the potential of the technology to capture every detail and make it a viable tool for researchers.”

Mohawk Mechanical Engineering student and AMRC co-op student Jason Podger was tasked with creating a step-by-step process to transform the data into a usable file for 3D printing.

“While the data that Environment Canada gave us had all the contours marked, it was like a piece of paper with no thickness,” explained Podger. “We had to convert it to a solid model and then add in the lakes and water so you can fully see the area in 3D.”

When Podger first started this project, in late 2015, a documented process for 3D printing topographical maps wasn’t yet available. (Although a few online tutorials have since sprung up, none, as of writing, address the complexity of the files that the AMRC was working with.) So before the printing of the scale model in plastic could begin, Podger had to create a 12- step process that used four different software tools in order to make the map multi-dimensional.

The new process created by Podger for the 3D printing of topographical maps resulted in a model, measuring a tiny (in comparison) 40 cm by 46.7 cm, that accurately captures the terrain of the watershed area.

“It was exciting to see the watershed and its landscape 3D printed and produced to this high level of accuracy. Now other researchers, scientists and collaborators can truly see the relative location and elevation of each lake within the system."

“It was exciting to see the watershed and its landscape 3D printed and produced to this high level of accuracy. Now other researchers, scientists and collaborators can truly see the relative location and elevation of each lake within the system,” said Norouzian.

Just as the new scale model of the Turkey Lakes Watershed Area helps researchers like Norouzian see the terrain in a new way, Coulson believes that the model has the potential to also help us see 3D printing in a new light.

About the Author: Andrea Johnson is the Promotions and Industry Liaison Officer for iDeaWORKS.