MOHAWK TEAMS UP WITH FANUC AND SIEMENS

Industry giants in automation and robotics are so keen to have job-ready graduates that they have embedded curriculum and certifications in colleges teaching on their systems. Innovative partnerships with companies like FANUC Canada and Siemens offer Mohaw 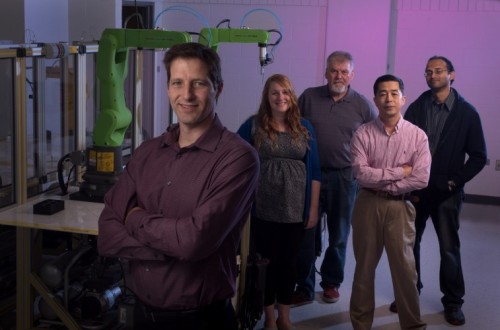 Mohawk opened its new $3-million FANUC Robotics Lab in September 2017. The lab is part of a partnership between Mohawk, FANUC Canada and Progressive Educational Systems to provide students in the Mechanical, Electrical and Computer Engineering Technology Advanced Diploma programs, as well as the Automotive and Vehicle Engineering Bachelor’s Degree (BTECH) with specialized instruction on the latest in robotics and automation technology.

In addition to the in-class training on actual FANUC robots, the students also have access to the company’s simulation software. FANUC’s industrial training curriculum has also been integrated into the programs. The specialized training gives students the opportunity to take the FANUC certification exam during the course of their studies. Students who pass the exam are then qualified to program and operate the company’s robots. There are more than 450,000 FANUC robots in use worldwide.

George Miltenburg, an Associate Dean with Mohawk’s School of Engineering Technology, said Mohawk approached FANUC for a strategic partnership, because a number of large employers in southern Ontario use FANUC robotic machining tools, such as lathes and milling machines.

“We are preparing our students to be future ready by working on cutting-edge robotics that are in use internationally and locally. We offer the same training that industrial customers would get if they went to FANUC directly.”

Mohawk also has an agreement with Siemens to deliver mechatronics certification to students. Because the Siemens’ mechatronics certificate program requires schools to have Siemens-trained faculty and curriculum based on its method in order to be an accredited institution, Mohawk sent several faculty to Berlin to study at the Siemens Technical Academy in 2016. Mohawk electrical professor John van Loon was one of them.

“The traditional method is to teach basic principles first and build on them. We keep building on the concepts from the ground up. Siemens’ method is to show the big picture to show where you are going,” said Van Loon.

Siemens’ approach is crossdisciplinary, experiential and focuses first on equipment operation. “They teach the maintenance that’s needed because when a plant’s line is down, that’s very expensive.”

Van Loon said that methodology is being employed in a range of Mohawk courses, including computer engineering technology, robotics and automation.

“These courses lend themselves to that beautifully. Having gone through the program, I’m excited about it. It can really change the way we teach.”

Partnerships with industry giants like Siemens and FANUC is just one of the ways Mohawk offers current and prospective students unique opportunities to graduate with the skills, experience and credentials they need to succeed

MOHAWK TEAMS UP WITH FANUC AND SIEMENS
Newsroom