Challenge 2025 is an ambitious five-year Mohawk initiative to tackle poverty, skills shortages and under-education in a post-pandemic economy

The access to education offered to marginalized people by Mohawk College’s City School has been transformational at the individual, family, neighbourhood and city levels.

With Challenge 2025, Mohawk aspires to amplify, accelerate and scale the effects of City School by providing tuition-free training for vulnerable populations that leads to family-sustaining jobs with employers in need of labour.

The vision is to see the model adopted by postsecondary institutions across the country.

Challenge 2025 is aimed at reversing the fortunes of those living in low-income neighbourhoods, along with those thrown out of work by disruptive technologies or by the downturn caused by COVID-19.

The regional goal is to provide pathways to college for 4,000 people and build partnerships with 100 employers facing labour shortages.

The college assembled a taskforce of leaders to forge the next level of the City School strategy. It was chaired by Mohawk President Ron McKerlie and Bill Young, President of Social Capital Partners, a catalyst for publicprivate partnerships to address poverty and joblessness.

The taskforce completed its work in August.

“We are very pleased that we are gaining traction with people who believe in what we’re doing with City School and Challenge 2025. We want to make a larger impact by amplifying this locally and across the country,” said McKerlie.

Since its launch in 2015, City School has served close to 600 people in marginalized communities, offering more than 100 credit courses at 10 community sites and two mobile units.

City School has been proven to remove barriers to postsecondary education; mitigate growing skills gaps; and create stronger and more resilient neighbourhoods by breaking cycles of under-education and unemployment.

“Education leads to family-supporting jobs and the economic independence that many aspire to but haven’t been able to achieve,” said Jim Vanderveken, Dean of the Centre for Community Partnerships and Experiential Learning.

“We know City School has been a catalyst for the transformation of learners’ lives, so we’re now focused on building greater collective impact and increasing capacity. The work is underway to create systemic change.”

Mohawk is investing in a rapid skills training team and an innovation fund to support research and to develop a replication model for other institutions to implement.

The college is leveraging that investment to access government funding and is embarking on a campaign to secure financial support through partnerships with local donors and national foundations.

Challenge 2025 is centred around a demandled workforce development model that responds directly to the needs of employers.

“The approach is that employers define the skills and competencies they require in their workforce, and we reverse-engineer the plan to deliver them,” said McKerlie.

Challenge 2025 is now in the hands of a community stewardship committee that will determine governance, lead strategic planning, and evaluate progress. A secretariat led by Emily Ecker, Associate Dean of Community Partnerships and Learning, will implement strategies, build partnerships, and govern a pilot to bring City School to three Canadian colleges.

The secretariat will also explore opportunities for industry-specific training initiatives.

The first is a City School training program for the supply chain sector that will serve an initial group of 144 people who receive Ontario Works social assistance, as well as newcomers and youth. That is funded by a $1.95 million grant from the Future Skills Centre.

When the vision of Challenge 2025 is realized, it will be one of the highlights of his 40-year career, says McKerlie. He shared the story of one City School graduate, a second-generation Ontario Works recipient who was getting her first job. She told McKerlie, with tears in her eyes, that her son had just enrolled at Mohawk. That would have never happened without what City School had done for her, she said.

Her story has stuck with McKerlie. “This is making a significant difference in people’s lives and there is no greater legacy than that.” 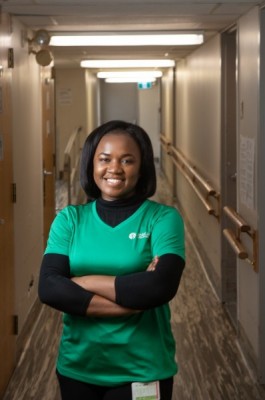 Chiamaka Maduike (pictured) says City School has set her on a path to fulfil her dream of becoming a registered nurse.

A native of Nigeria, she joined her husband in Canada in January. Just a month later, she was taking the Foundations 1: Personal Support Worker credit course.

“After a few classes, I found out I have a heart to help people,” said Maduike, who is now employed at Thrive Group’s AbleLiving York Project, which provides supports to individuals with physical disabilities in an apartment setting.

“City School has prepared me mentally, physically and emotionally for the task ahead. I feel prepared for the nursing program and I know what’s expected of me.”

For Jacob Wolsey, 19, City School’s College 101 preparatory course and PSW foundations course, has led to both studying at college and employment as a personal attendant.

“City School is a great opportunity. It’s a beneficial thing for students who are thinking about going to college.”