Mohawk is among just 17 postsecondary institutions nationwide chosen for a pilot that embeds equity, diversity and inclusion into research practices 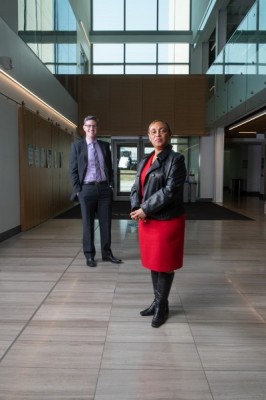 Mohawk College, a national leader in applied research, is among 17 Canadian postsecondary institutions chosen by federal research funding agencies to act on a commitment to building principles of equity, diversity and inclusion into all areas of academic and research activities.

After being a signatory to the Dimensions Charter, Mohawk is one of just five colleges asked to join the two-year pilot of the Dimensions: Equity, Diversity and Inclusion Canada program.

“That is a tremendous honour to be on the national stage in something so important,” said Jeff McIsaac, Dean of Applied Research at Mohawk.

The college has committed to advancing equity, diversity and inclusion (EDI) in its strategic plan and established a director and special advisor dedicated to EDI in its leadership group.

Maxine Carter took on that role in 2017.

“The goal of the Dimensions Charter is to foster transformational change in EDI in postsecondary institutions and to raise the level of research excellence. Researchers are often the ones we depend on to make decisions that drive progress,” said Carter.

But if research only looks at issues through one lens, it leaves many out.

“It’s critical that researchers have a deep understanding of EDI and the importance of being reflective of their community. The work they produce should include an understanding of the systemic barriers and gaps so that results represent all voices and identities of the community in a much more authentic way.”

The Dimensions Charter comes at a time when the fight for racial equity is front and centre, a profound illustration of why the ongoing work to advance an agenda of equity, inclusion and social justice is critically important, says Carter.

She was one of the stakeholders who consulted with NSERC on the initiative, which was adapted from the United Kingdom’s Athena Forum.

Mohawk’s EDI initiatives include a focus on groups traditionally underserved or underrepresented in postsecondary education.

“Our strategy includes a commitment to addressing barriers to education for Indigenous people, women, racialized groups, persons with disabilities and the 2SLGBTQIA+ community,” said McIsaac.

As well, Mohawk’s City School and Challenge 2025 initiatives target delivering educational opportunities to those impacted by socioeconomic structural disadvantages, including those on social assistance, and living in targeted low-income neighbourhoods.

“When it comes to poverty, we need to be intentional and examine the intersectionality within the five disadvantaged groups we are focused on and can only emphasize why we need to dig deeper to identify root causes,” said Carter.

McIsaac says the intersectionality of identities of disadvantaged groups makes solutions complex. But Mohawk’s across-the-board and top-down commitment to EDI is “driving a fundamental shift in mindset and culture at Mohawk that is continuing to make us better.”

Turning an EDI lens to applied research is an important next step in Mohawk’s journey, says McIsaac, a process that has begun with the college’s submission to the Dimensions Charter pilot. That resulted from broad input from the Mohawk community, including senior leadership, recent graduates, researchers, faculty, staff in human resources and administration, and those from target groups.

“The intent is to challenge our own biases, even the ones we may not be aware of, and to ensure we use multiple lenses to look at issues,” said McIsaac.

As the pilot begins its rollout, it will require building a structure to embed EDI in applied research activities and raising awareness across Mohawk about what is underway, says Carter.

“We were already doing this work, but the charter elevates it, brings more synergy, and shares it with institutions across the country.”