A ground-breaking cross-Canada initiative led by Mohawk College will be at the forefront of both climate change action and a post-pandemic economic recovery, and signals a “coming of age” moment for the nation’s college system, says a noted sustainability researcher.

Initially, Canadian Colleges for a Resilient Recovery (C2R2) brings together 16 colleges, institutions, polytechnics and CEGEPs and is close to its goal of representing every province and territory. Together, colleges will create an action plan that targets training a minimum of 50,000 Canadians for the low-carbon economy in the next three years.

C2R2 will champion green recovery projects that deliver good jobs to Canada while also addressing socio-economic inequality. The initiative was born to take meaningful action on the recommendations of the Task Force for a Resilient Economy, which called for a $55.4-billion strategy for a green recovery in Canada.

Mohawk President Ron McKerlie began reaching out to his peers at colleges with leading sustainability programs before the task force issued its report this summer. He shared with each the college’s 15-page proposal for its vision of the C2R2 and the impact it could make.

McKerlie, who will serve as the first chair of the C2R2, says he found nothing but support and enthusiasm from other colleges for starting work immediately and collectively.

“As the economy starts to recover, it will require retraining and reskilling the workforce to take on the kind of jobs that will drive the new economy,” he said.

“Colleges are at the very centre of that and the most effective way for us to drive rapid change is by collaborating right from the beginning to share resources and best practices.”

Mohawk’s Centre for Climate Change Management (CCCM), a hub of sustainability innovation, is acting as the secretariat for the initiative, along with David Wheeler, a noted sustainability researcher and advocate, as a special advisor.

“I’ve always sought to go where the action is in the public, private and academic sector. It’s clear that Mohawk is establishing national leadership on sustainability,” said Wheeler. 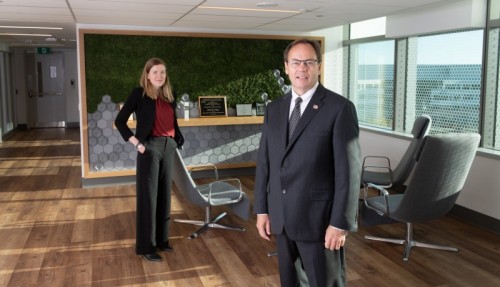 By working together, colleges will be the backbone of a shift to a clean economy, he says.

“I really think this is a moment where the college sector is coming of age,” said the former President of Cape Breton University. “This is not something that universities could do. That system is not geared to this level of national collaboration and responsiveness.”

Key global organizations, including the United Nations, the Organization for Economic Cooperation and Development, and the World Bank are advocating for a post-pandemic focus on a green recovery.

That can be built around a whole host of sectors, including zero-carbon buildings, industrial energy efficiency, and green agriculture.

Wheeler hopes to see governments provide tuition incentives for green programs and that a new sustainable economy will be inclusive of young people, women, Indigenous people, newcomers, those out of work, and anyone left behind by the pandemic.

C2R2 will harness the power of colleges, including their hands-on and experiential learning approach, the applied research that delivers innovation and investment, and their ability to act as demonstration sites and living labs for climate change solutions.

Collectively, they will build, implement and share curriculum and research initiatives in their areas of expertise that support a resilient recovery, while modelling and championing best practices on their own campuses and within their communities.

C2R2 will host a national webinar series, showcasing faculty and researchers from each partner college, who will share transferable and scalable recovery solutions. The goal is to see each institution pilot a rapid training model to address a local clean economy skills gap by 2023, with each focused on serving underrepresented groups.

The scale of the need and the timeframe to meet it requires a national approach, says Tony Cupido, Mohawk’s Research Chair in Sustainability at IDEAWORKS.

“Mohawk is already at the forefront of sustainability and now we are aligning with partners with similar missions to drive action on skills development and applied research.”

There seems to be no precedence for this kind of nation-wide collaboration between colleges, says Kate Flynn, Acting Director of the CCCM.

“We are showing the college system can respond to this kind of need. We have the flexibility and resources to do this work and respond to the change that is coming.”