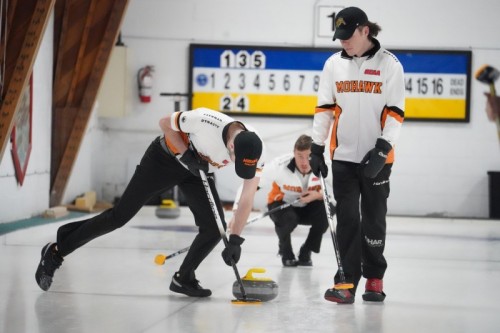 After a well-deserved winter break, Mohawk Mountaineers returned to action this past week.

The defending OCAA Champion men’s curling team were back on the rink on the weekend, participating in the McMaster Invitational Bonspiel. Facing some of Ontario’s top universities, the Mountaineers came away with four wins and one tie.

Mohawk was one of three teams to not lose at the bonspiel as they will gear up to defend their title at the OCAA Championship in February. Prior to that they will participate at the Niagara Bonspiel during the weekend of January 27.

Both volleyball teams also returned to action, facing cross-city rivals the Redeemer Royals. The Mountaineers women’s team struggled to start the second half of the season, while the men’s team nearly completed a comeback but fell short in the fifth set.

The basketball teams return to action on Saturday when they host the Niagara Knights inside the David Braley Athletic and Recreation Centre. Action tips-off at 1 p.m. for the women’s game and 3 p.m. for the men.

With the second half of the season set to begin for basketball, it should be noted we are only two months away from the CCAA Women’s Basketball National Championship tournament which will take place at Mohawk.

·       Basketball is back in the DBARC for some evening basketball against the Humber Hawks. Women’s game tips-off at 6 p.m. and men’s game at 8 p.m.