Mountaineers team up to win around the bay relay 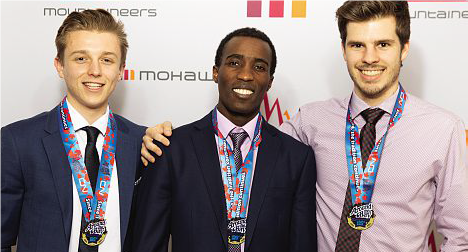 The Mohawk cross country season may have ended but teammates Carter Rudge and Kyle Rooke, with assistant coach Kyler Norton, pledged to compete together in the Around the Bay Race 30 km relay.

A rough winter and injuries prevented much training for the race, with Rudge nursing an ankle injury until January and Norton training with easy runs adding up to 40 km a week. Rooke ended up with a stress fracture and had to bow out of the race a few days prior. Mountaineers teammate Fred Muriu stepped in to substitute for Rooke.

Despite Rudge feeling ill the day of the race, and Muriu’s last minute substitution, the team ended up placing first in the 30 km men’s open relay. Rudge noted it wasn’t an easy run despite the win.

“Myself and Fred really felt it in the back half of our legs because we had not had the chance to run that much over the last two months. There is also a big hill at 26 km that Kyler noted was very tough.”

Rudge was pleased with the results and the team’s performance. “We were all excited we won, and very happy we ran the 30 km in under two hours as a team.”

Mountaineers team up to win around the bay relay
Newsroom