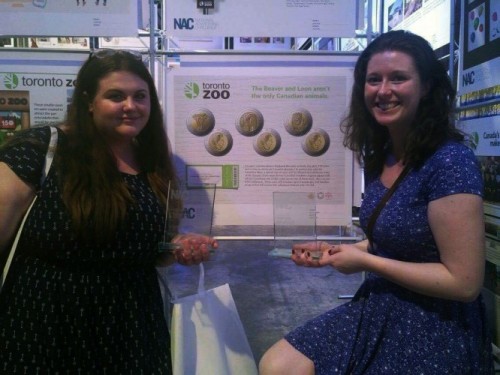 For first-year Advertising students Ailsa Walter and Chenice Piercy there’s no doubt that the many, many hours spent sharing ideas, creating drafts and agonizing over the right choice of words was worth the effort when they heard their names called not just once, but twice at the National Advertising Challenge (NAC) awards show. Ailsa and Chenice took both the gold and the bronze in the Student Challenge at the 2017 NAC show held in Toronto on May 17.

“When you pour your heart and soul into something and spend so much time perfecting it and getting it right, to hear your name called is such an amazing feeling,” said Ailsa. “We weren’t expecting this. It was a huge surprise.”

“I was just excited to be going so I could admire everyone’s work,” said Chenice. “I was shocked. We did not expect to win.”

The NAC is a national awards competition for Canada’s advertising industry. Mohawk Creative Advertising professor Jef Petrossi says competitions like the NAC matter to the industry.

“Competitions are one of the ways ad agencies promote themselves and show what they’re capable of producing,” he said.

“When you pour your heart and soul into something and spend so much time perfecting it and getting it right, to hear your name called is such an amazing feeling. We weren’t expecting this. It was a huge surprise.”

For Ailsa and Chenice, the NAC was a chance to put their creative minds to work on a project that mirrors what professional creatives encounter every day in an agency setting. All entries had to answer a creative brief. In this case it was for the Toronto Zoo, and the challenge was to design an advertising campaign that would entice families to visit the zoo as part of Canada’s 150th celebrations when other parks and national attractions were offering free admission.

Chenice and Ailsa came up with two ideas. Their first, and the one they received the Gold for, was to put images of the zoo’s animals on Canadian coins such as Toonies and Loonies. A limited number of the coins would be put into circulation and anyone who found one could get into the zoo for free. The campaign publicity would help to promote the zoo and draw paying customers, and by featuring animals from different parts of the world they would also be celebrating Canada’s diversity. The second idea, which they were not required to do but did for fun, featured balloon animals meant to entice children to convince parents to take them to the zoo. They won Bronze for that submission.

Jef says entering the competition is a requirement for all first-year Advertising students. He and fellow Mohawk Advertising prof Rafael Ferreira act as sounding boards for the ideas and give some coaching along the way, but it’s the students that spend countless hours tweaking and perfecting their ideas.

Students from the Mohawk program have won gold at the competition for the past four years. This is the first time that a team has won two medals in the same competition.

Both Chenice and Ailsa came to Mohawk after attending programs at another college and university, and both say that their experience with this competition proves they made the right choice.

“I really wanted to do something creative,” said Ailsa. “Mohawk had the credibility and great professors.”