Mohawk College’s research on student success has been recognized with a national award.

The College Student Success Innovation Centre (CSSIC) at Mohawk was honoured on June 19 with the CACUSS Innovation Award at the annual conference of the Canadian Association of College and University Student Services in Calgary. The award recognizes a new or innovative program or service that exemplifies innovation and excellence, and could serve as a model or example of a promising practice for other institutions.

“We are proud to receive this award as affirmation of Mohawk College’s commitment to supporting students as they pursue their education,” says Tim Fricker, Dean of Students at Mohawk College. “Though the centre has only been open one year, we are seeing promising results. We are grateful to the college leadership for supporting our dedicated team in our efforts.”

The CSSIC is the first of its kind in Canada. It’s a unique research centre, located on Mohawk’s main campus, focused on community college student success. The centre is producing new interventions and services, and backing it up with evidence rigorously produced through tested standard research methods, such as randomized control trials.

The centre’s research team has generated research funding totaling $1.7 million since 2015, including seven funded projects and a number of new projects in development, involving local school boards and Indigenous communities. In addition, scholarly activities include more than a dozen invited presentations and 10 research publications, with several more pending release over the next few months. 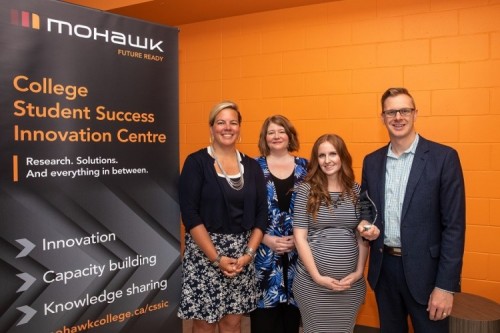