Mohawk is teaching industry how drones, laser scanners and virtual reality can make time-consuming tasks like surveying faster and easier 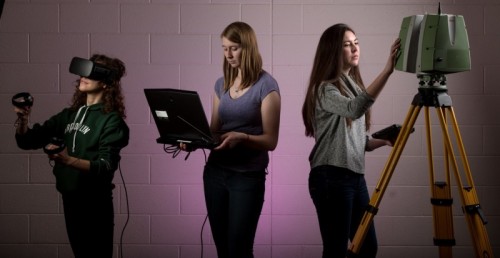 Mohawk Building and Construction Sciences students are using bleeding-edge technology yet to be adopted by surveying and construction professionals, says Professor Richard Borger.

“We are actually pushing technology into industry. That should be a role of educational institutions, to de-risk technology for our industry partners.”

Combining drones with sophisticated 3D LiDAR scanners means entire buildings can be captured in minutes, right down to the locations of wall outlets and mechanical conduits. The data is used to build detailed floor plans without having to do any measurements.

Mohawk students used that technology to produce a 360-degree scan of the former Westinghouse office building using 3.6 billion data points. It’s Borger’s dream to generate a 3D image of the rock face of the American side of the Niagara Falls when the water is diverted to replace a pedestrian bridge sometime in the future.

“We are the only institution in north-eastern North America with this kind of capability,” said Borger, who says this is thanks to the support of faculty, staff and college leaders

Drones and scanners can map mines and quarries and survey the conditions of trees, plants and crops, says chemical engineering professor Greg Matzke. “It’s not widely used yet, so there is much potential. Drones allow access to places we could not have gone before.”

Matzke, who has a drone operator licence, foresees a course built around the technology in the near future, perhaps eventually growing to a certificate program.

All of the data captured by drones and scanners can be taken into cutting-edge virtual reality to create 3D worlds.

“Architects, engineers, building owners and contractors can meet virtually, see what each other sees, and mark up drawings. Together, they are experiencing the model as it would be built,” said Borger.

WHAT AUTONOMOUS VEHICLES CAN TEACH US ABOUT HOW MACHINES LEARN 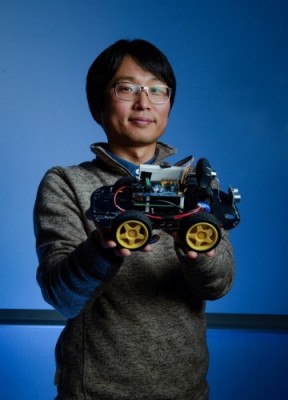 All the components of a road-worthy autonomous car are contained in a model built by third-year computer software technician student Kugsang Jeong. The car is built on a Raspberry Pi single-board computer and uses machine-learning artificial intelligence, along with video cameras and sensors to navigate its environment.

Jeong had a special interest in a self-driving car, so Dennis Angle, Professor of Computer Science and Information Technology, asked for the funding to buy a basic kit.

“If it was on the road, it could detect traffic lights, pedestrians or other cars,” said Jeong, whose main focus is on digital health. His goal was to learn about the machine learning, which will have an enormous impact on a vast number of sectors.

All Mohawk College software engineering students are able to write and work on the code that drives autonomous vehicles, said Angle.