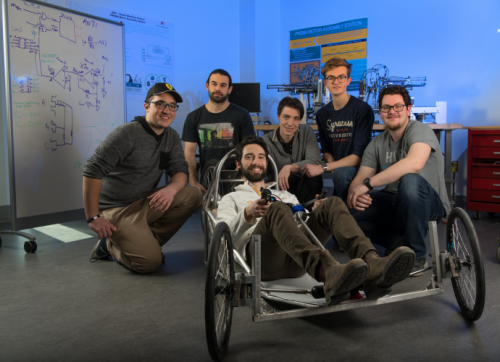 They have designed it, created and modified the components, and built the vehicle. Now it’s time to put it up against other student - designed vehicles in a fuel-efficiency challenge.

The Mohawk College eco-car team is gearing up to compete in the Shell Eco-marathon Challenge in Sonoma, California.

The competition is based on building a fuel-efficient prototype – a single-seat vehicle – or a two-seater concept vehicle. The vehicles can be powered with lithium ion batteries, hydrogen or gas.

The 10-member Mohawk team will compete in the battery prototype division.

spent all three years at Mohawk on the eco-car team. He joined for the hands-on work and says the learning process, the teamwork and his leadership experience have given him a head-start in landing a job.

It is a demanding commitment. At least one day a week, the team puts in an eight-hour day and most days are three to four hours. By the third week of March, LaPorta has put in more than 160 hours in 2019.

Each year, new students come on board, who learn from the older ones. They are all guided by faculty members who lend their expertise and advice. It’s just like getting a start-up off the ground, he says.

“It’s been a great experience. I realize how difficult it is to get something to work. There are always challenges to overcome. It’s frustrating but it’s important.”