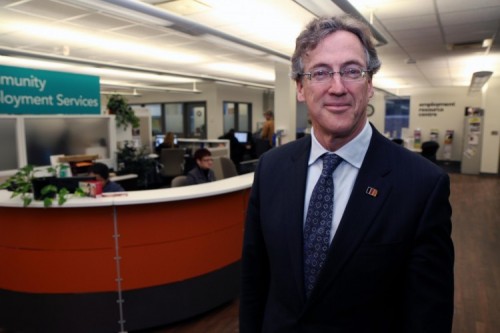 Mohawk College pledged six years ago to play a leading role in tackling poverty in Hamilton.

“The college wasn’t taking a sideline approach. We decided to step into the breach,” said Jim Vanderveken, the Dean of the Faculty of Interdisciplinary Studies, who has led the charge.

The college’s innovative Community Access Strategy and the 10 initiatives that have come out of it have meant at least 800 students who felt they had no chance get a college education have enrolled or studied at a post-secondary institution in the last five years. And the outreach to high school students, neighbourhood residents and those upgrading skills has totalled more than 11,000.

“We aim to help the most vulnerable, those at the periphery and those marginalized due to layoffs and lack of income.”

The college formed a Community Access Strategy cabinet of the city’s leaders to realize the vision of vastly improving the ability of non-traditional populations to earn a college education.

“Education is the great poverty to prosperity bridge. It allows people to imagine a different destination for themselves.”

While Mohawk was focused on establishing a leadership role in using education to mitigate the disadvantages of living in poverty, The Spectator’s Code Red series published a few months later in April 2010 accelerated the community conversations and coalesced action, says Vanderveken.

“That series really starkly defined the needs and created this shared energy and commitment to work together.”

Vanderveken and others working on the Community Access Strategy believe education is the answer.

“Education is the great poverty to prosperity bridge. It allows people to imagine a different destination for themselves.”

Mohawk’s leaders made community access a central priority, says Vanderveken, and the CAS cabinet quickly had an action plan. Community partners committed to collaborations without concern for jurisdictions or boundaries and with a willingness to experiment, he says.

An early result was College in Motion. The concept came out of an “unconference” held one fall Saturday in 2010 at Parkview Secondary School, a meeting of students, parents, residents and stakeholders Vanderveken calls a “watershed opportunity” to hear voices that still inform Mohawk’s approach today.

“We were having all these open houses at the Fennell campus, telling people just to come to us and the doors would swing open. Then we heard from people who said they didn’t even cross the rail tracks. We learned that many in very vulnerable communities don’t travel beyond a six-block radius from home.”

“That day resonates with our staff still. We learned so much about the communities we were talking about,” said Vanderveken.

Residents of Hamilton’s northeast neighbourhoods told Mohawk leaders that they never travelled up the Mountain.

“We were having all these open houses at the Fennell campus, telling people just to come to us and the doors would swing open. Then we heard from people who said they didn’t even cross the rail tracks. We learned that many in very vulnerable communities don’t travel beyond a six-block radius from home.”

It was apparent that unless the college did something dramatic to create a bridge to the target neighbourhoods, any initiatives would be a non-starter, says Vanderveken, who arrived at Mohawk in 1987 as a training specialist for those losing manufacturing jobs.

The bridge is College in Motion (CIM), a team of “navigators” who work with disengaged high school students to help them see beyond their current life challenges. CIM navigators work in 32 sites across the city, mostly in high schools but in a handful of community centres as well.

“Many of these young people didn’t think they could dream. CIM asks them what they want to do and helps them take the steps to get there. It doesn’t matter if that’s another college or university, they need someone to help them navigate and be an advocate.”

That includes exploring course options, working through the application process and applying for scholarships or bursaries. For some students, that’s routing them to trades or apprenticeships. CIM has worked with about 2,500 students and more than 800 of them have enrolled at Mohawk.

CIM laid the foundation for other programs, including the Future Ready Loyalty Card, which allows high school students to collect points for attending events and activities on campus and off. Those points can be converted to a bursary of up to $1,000. About 1,200 cardholders are collecting points.

“We wanted to create hope for students that this might be possible, to get a diploma and start a career. We were mindful of the generational shift this could enable for some families who have never had anyone attend post-secondary education.”

The accessibility work was given a huge boost in 2012 with a donation of $1.5 million from the Ron Joyce Foundation in aimed at bursaries for those in financial need. With $500,000 added from the province, it’s enough for 20 full-tuition scholarships a year.

That was followed by an infusion of $100,000 from to Doug and June Barber to support scholarships and programming for Mohawk’s City School, which brings college offerings to inner-city neighbourhoods.

The goal is to give those who are unemployed or underemployed the ability, confidence and motivation to pursue post-secondary education. The programs are tuition free.

The first City School location launched at the Eva Rothwell Centre at Robert Land in October. Mohawk has invested $60,000 in renovating a classroom at Eva Rothwell that replicates those on campus. A team of college faculty and staff rotate through the centre on a weekly basis.

“It’s crucial that we are building trust in these neighbourhoods. We needed to demonstrate that we are in this for the long term. We’ve been on this journey since 2010 and we are fully committed to this.”

Another avenue for access students is the province’s dual credit program, which allows students at risk of dropping out to earn credits to both finish their high-school diploma and to start their college path.

There are 1,700 high school students taking credits at Mohawk through the program this year, says Vanderveken. This is equal to the enrolment at the city’s larger high schools. The college has several dozen dual credit offerings in technology, media studies, business and general education. There are also credits for indigenous and second-language students.

“It’s an entirely different experience for them being on a college campus. Many are engaged and excited by it. An at-risk student in high school can be transformed at college.”

Vanderveken is energized by Mohawk’s commitment and “compelling investment” in bringing educational opportunities to everyone. Providing accessible pathways is among the differentiating strengths engrained in Mohawk’s strategic mandate agreement with the province reached last year.

“I’m not aware of any other college in Ontario that has undertaken this level of strategic commitment to support accessible pathways to post-secondary education for vulnerable communities to reduce poverty,” he said.

“No one was talking about this in 2010 when we started but that is changing. We’re proud to be working with outstanding community partners like the City of Hamilton, both the public and Catholic district school boards, the Hamilton Community Foundation, Mission Services, the Robert Land Community Association and Culture for Kids in the Arts.”