Spotlight on: Joe Duda, Manager of The Agency at Mohawk College 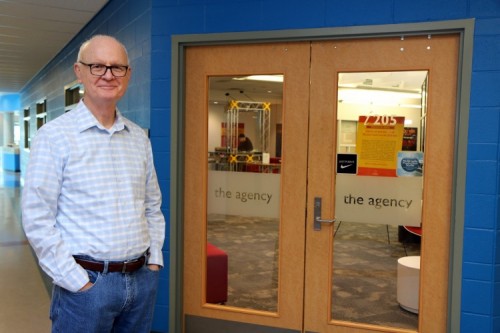 Being a leader in simulation-based learning is one of the goals in Mohawk College’s new strategic plan.

The McKeil School of Business is already there with The Agency.

The Agency immerses students in an environment that mirrors their future workplaces. Students brainstorm and execute plans in a funky, anti-classroom. It’s a custom-designed space that encourages students to think dynamically, professionally and creatively to solve the problems of start-ups and non-profits. Students put into practice the knowledge and experience they’ve gained in their studies by working alongside real clients on real campaigns. That means thinking like those already doing the work the students are still studying to do.

The Agency’s I-wing space at the Fennell campus is open concept and filled with beanbag chairs and lounge chairs, white boards and large monitors. There are interview rooms, boardrooms for focus groups and an audio-visual studio.

“It’s meant to replicate the look and feel of an ad or PR agency,” said Joe Duda, manager for The Agency.

“Students aren’t just executing someone else’s ideas. They come up with the plans themselves. They must also learn the soft skills necessary to handle clients and work in interdisciplinary teams.

Joe Duda, Manager of The Agency
„

Duda came to Mohawk eight years ago as a part-time professor in the Advertising program. Four years ago, he was asked to develop a living lab concept then in its infancy. That concept grew into The Agency.

Students work on real-world marketing or advertising projects by asking clients to define their goals, objectives and challenges and then come up with solutions over the course of a semester.

“Students aren’t just executing someone else’s ideas. They come up with the plans themselves,” said Duda. They must also learn the soft skills necessary to handle clients and work in interdisciplinary teams.

Students in their final years in the Advertising and Marketing Communications Management, Public Relations, Marketing, Journalism, Broadcast Media and Graphic Design Programs work on special projects with about two dozen partners each year. They are mostly not-for-profits and start-ups coming out of Hamilton’s Innovation Factory and The Forge at McMaster University.

“Most of our partners are zeroed in on a product or service they are developing but from a marketing or communications side of things they don’t have a plan. They need help with that and they need help on a shoestring budget… Students provide real value.”

In fact, part of the winnings in Hamilton’s entrepreneurial contest the Lion’s Lair is the services of Mohawk’s The Agency.

Start-ups and non-profits get the help they need to effectively connect with their audience and in return, Mohawk students get real-life experience while earning grades.

“It’s a nice hybrid. Students are marked on their work but they are delivering real solutions. This takes it out of the classroom and into the community,” said Duda.

“It’s a win-win. Our first priority is to deliver learning outcomes for our students and making sure every engagement with a client yields tangible results for the students, including something they can add to their portfolio that will help them find work after college.”

Advertising, Marketing and Graphic Design students create the campaigns and Public Relations students develop a communications strategy. Students in the College’s Journalism and Broadcast Media programs also get involved in the campaigns when there’s a need for media coverage or documentary videos.

The Agency solicits submissions from local start-ups and not-for-profits twice a year.

Its roster of 100-plus clients include Habitat for Humanity, the Dundas Valley School of Art, the Red Cross, the CNIB, Big Brothers and Big Sisters of Hamilton/Burlington, Hamilton Tool Library, Supercrawl, the Hamilton Philharmonic Orchestra and Start the Cycle, a bike-sharing project that secured the financial support of Dofasco and RBC.

The Agency’s work has led some students directly to employment. The HPO, for instance, hired a student who had worked on its campaign to attract a younger audience for a new a music festival.

Seeing students succeed and launch their careers is what it’s all about, says Duda. A graduate of the Ontario College of Art (now called OCAD University), Duda worked for several years at the Art Gallery of Ontario before being one of three partners to found Burlington-based advertising agency OK&D in 1985.

Duda was a vice-president and creative director when he sold his partnership in 2002. “I wanted to change direction.”

That change included renovating an old farmhouse in Jerseyville and doing some consulting.

“In 2008, I realized I’d like to teach. I had a lot of experience in the industry but I didn’t want to go back to that. You start solving the same problems over and over. I wanted a different challenge and I wanted to give back,” said Duda, who now lives in Ancaster.

He enjoys teaching both facets of advertising, the creative side and the business side.

“It's really gratifying to see the students get it.”

Spotlight on: Joe Duda, Manager of The Agency at Mohawk College