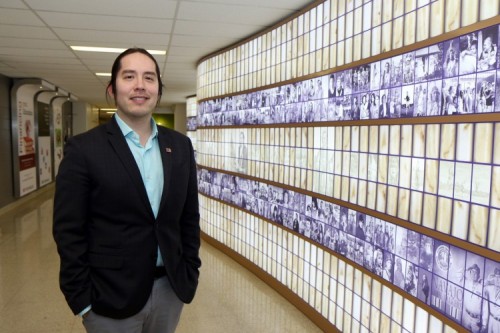 Ron (Deganadus) McLester was given his second name as a 13-year-old boy growing up on Oneida Nation territory in north-eastern Wisconsin.

He was told his name means “Two towns coming up together”. At first, he wasn’t fond of his name because of the influence of popular culture and movies but his opinion changed over time. McLester, Mohawk’s director and special advisor, Indigenous Initiatives, feels he has since grown into his name.

“I feel like I get to work with two towns and help them come up together. I get to help students on their journey while also promoting Aboriginal ways of knowing.”

That fundraising has allowed more outreach, more advisory and counselling services and an indoor student gathering space. The second phase of an outdoor aboriginal education centre will be finished in the spring of 2016. The Indigenous Gathering Space: Hoop Dance behind the Harold Cummings Collaboratory is the first of its kind among colleges in the Greater Toronto and Hamilton Area.

That space was officially dedicated last fall after Mohawk President Ron McKerlie signed the Indigenous Education Protocol developed by Colleges and Institutes Canada. The protocol outlines a vision of how colleges can improve practices to better educate and serve Indigenous peoples.

McLester, the recipient of Mohawk’s highest staff honour, the President’s Award, in 2012 and the College’s nominee for a leadership excellence award from the Association of Canadian Community Colleges in 2013, is now leading the final phase of the development of an Indigenous education plan for Mohawk.

That plan will promote awareness of the college among urban and on-territory Aboriginal communities, build Indigenous content and culture into course curriculum and increase responsiveness to Aboriginal learners.

The plan is expected to be presented to the Board of Governors in the summer.

“The idea is to collaborate and cooperate rather than compete. We will build programs that will allow students to ladder between institutions, perhaps starting at Six Nations Polytechnic and leading to college or university. The goal is to offer academic opportunities and build pathways.”

McLester and his office have also reached well beyond the walls of Mohawk. The Bundled Arrows Initiative, a multi-institutional group, has received a renewal of a three-year commitment to more than $1 million in funding. Bundled Arrows is a group of post-secondary institutions, including Six Nations Polytechnic, working together to create a regional Indigenous educational strategy.

“The idea is to collaborate and cooperate rather than compete,” said McLester. “We will build programs that will allow students to ladder between institutions, perhaps starting at Six Nations Polytechnic and leading to college or university. The goal is to offer academic opportunities and build pathways.”

Bundled Arrows is now working on a call-to-action paper to take to the leaders of the academic institutions for a formal commitment.

Working together is important because overcoming educational barriers for Aboriginals, whether those are financial, cultural, academic or family expectations, is challenging on a number of fronts, says McLester.

“It’s hard to track data because Aboriginal self-identification is an incredibly large hurdle, not just at Mohawk but throughout the province and the country. The student has to be willing to check the box that they are First Nations, Metis or Inuit.”

There are about 340 self-identified aboriginal students at Mohawk, through McLester says the actual number could be much higher.

“I love Mohawk. This is a special place. There really is magic here.”

Some students don’t want to self-identify or access services at the Aboriginal Education Office because they didn’t grow up on a reserve or speak the language so they don’t feel “native enough.” Others don’t want special treatment, says McLester.

Mohawk’s Aboriginal Education Office has literally thrown open its doors. When McLester joined Mohawk, the main office was tucked behind a secured door in E-wing.

“Students had to be on a special list to get inside. In 2011, we consolidated services into one office in a beautiful space for staff, elders and students. There’s a computer lab, lounge, kitchen space. It’s almost a home-like atmosphere. It’s a place to be together and it’s much more open.”

Soon to follow is the second phase of the outdoor gathering place, called Hoop Dance. Already constructed are a water feature, a fire pit and wooden seats. The remaining part of the plan is expected to be finished this summer.

“We hope to see it become a regional destination for the transmission and celebration of aboriginal knowledge and culture,” said McLester, who came to Canada to study criminology at the University of Guelph.

He also did post graduate studies in social work at McMaster and graduated in April with a masters in executive leadership from Guelph.

He says his job allows him to leverage traditional teachings of Two Row Wampum, which calls for the respect of the language, culture, traditions and governance of the people across the water.

Mohawk embodies that, he says.

“I love Mohawk. This is a special place. There really is magic here.”