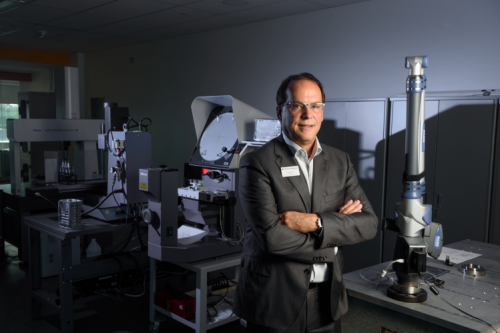 David Santi had settled into a nice life in Arizona doing business consulting when Mohawk College urged him to take on the role of Dean of Engineering Technology Aviation.

But thanks to the urging of his wife, he changed his mind.

“She pointed out that this is a place I can proudly finish my career.“

Now, just over a year into his post, Santi knows he made the right choice.

“I‘ve gotten more out of being here than Mohawk will ever get,“ he said. “This is a place that has all the pieces in place. The people are so smart and they want to work together because they are all focused on students.“

Santi had worked extensively with faculty, deans and college leaders during his 25-year career at ArcelorMittal Dofasco, including creating a first-of-its-kind apprenticeship program and a retraining program for 600 laid-off employees.

“I almost felt like I worked here at times. I selfishly used Mohawk over my entire corporate career.“

Mohawk identified the first priority being guiding the planning and development of The Joyce Centre for Partnership Innovation. He‘s also tasked with setting a vision and structure for the department and growing industry connections.

Santi grew up in Hamilton and Burlington and studied forestry and mobile equipment at Sanford Fleming College. He did an apprenticeship before going to Western University for technological studies and teachers‘ college. He couldn‘t land a full-time teaching job.

So he took a job in the maintenance department at Dofasco, where both his father and grandfather had long careers. Santi soon found himself working on quality and process improvement projects in the midst of downsizing. Then human resources seconded him.

“I went kicking and fighting. In some ways, I wasn‘t sure if it was the end of my career or the beginning of a new one.“

Turns out it was a beginning. He is a voracious reader of organizational and leadership books and talked his boss into letting him examine companies that were leading in adapting to change.

“I realized we had to do things differently. I learned that it all had to be built around a highly skilled, competent workforce.“

After a solid and successful career at ArcelorMittal Dofasco, Santi went to work for Suncor Energy in Calgary as Director of Learning and Competency Development where he led the development of the competency strategy and Operational Excellence Management System learning standards.

Santi, a father of three daughters who have pursued postsecondary education in math and engineering, says his route to becoming a dean hasn‘t been traditional, but his strength is building partnerships. He wants to bring jobs to Hamilton, especially in aerospace and manufacturing.

Why did you take this job at Mohawk?

My time in Calgary showed me how exceptional Mohawk is in terms of connection to industry, the partnership with McMaster and its commitment to sustainability. When I went to Suncor, the college out there didn‘t get me. They didn‘t understand what I wanted. I thought all colleges were like Mohawk. I learned they aren‘t. I flew Mohawk people to Calgary to help solve problems.

You‘ve been in your role just over a year. What is the biggest challenge?

There is so much we could do, so it‘s trying to balance the opportunities and understand what ones we should go after. We can‘t be everything to everybody but it‘s hard to say no. Attracting the right faculty is critical, too. If we can do that better than anyone else, then everything else is easy.

What does The Joyce Centre for Partnership Innovation represent for Mohawk?

There will be a lot of zero carbon buildings in the next 10 years and we can inform the world with the data we collect here. And our academic programs will ensure competency in building these buildings. People said this building was impossible. I want more impossible. Mohawk took a big risk on new technology that had never been tried on this scale in Canada and showed we were up to the challenge.

Is there anything that has surprised you so far about Mohawk?

t a table of deans and vice presidents, there are no big egos. It‘s amazing to say that, but it‘s true. I don‘t think there is anything we can‘t do. What‘s next for you? The only job I haven‘t been able to figure out, but I need to, is the job called retirement. It stresses me out. I‘m not sure what it means to not be adding value.