YOUR FUTURE COWORKERS COULD BE ROBOTS

Mohawk students are learning to program, operate, set up and repair some of the world’s most advanced industrial robots 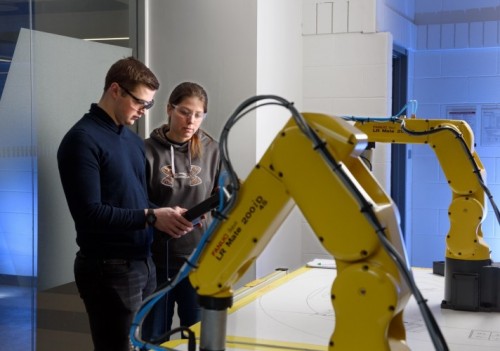 Robots have been in industrial settings for decades, doing difficult, dangerous or dirty tasks – bolted down and fenced off to protect human workers.

But advanced robots, equipped with sensors, artificial intelligence and machine learning, now have the senses, dexterity and intelligence to work sideby- side with human workers. These collaborative robots are smaller and more adaptable, making them viable for a greater range of tasks in more settings.

“There has been a lot of progress and innovation in producing collaborative robots,” said John van Loon, an electrical engineering technology professor at Mohawk. “They know the force they are exerting, they can determine the world around them, they respond to the presence of people, and they will stop if they come in contact with a person. That allows them to work alongside people.”

Robots are becoming so advanced they can even sense and interpret human facial expressions, movement and tone of voice.

“It’s all targeted toward interacting with people in all kinds of ways. The Renaissance Hotel in Las Vegas uses a delivery robot. It takes the elevators and travels the halls and calls the room to bring food or towels. That robot has to navigate through crowds of people, which is an inherently unpredictable environment.”

And modern robots, big and small, can interact and work together, performing tasks they couldn’t accomplish alone, for instance.

“On a search and rescue operation, a squadron of drones equipped with imaging equipment can cover a large swath of land in a search pattern. They understand where every other drone is, what each field of view is, and how everyone is moving so that nothing is missed.”

Mohawk partner FANUC has developed some of Canada’s first industrial collaborative robots, which are integrated into Mohawk’s course offerings.

YOUR FUTURE COWORKERS COULD BE ROBOTS
Newsroom